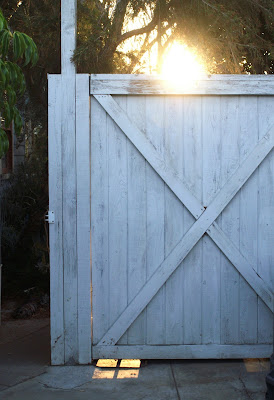 Back in the day, homes were often aligned east/west, north/south I guess.  Being built in 1936, my house is oriented to the east and the equinox sun rising aligns with the driveway.  It's cool, but really just simple geometry in action.  There is a week or so either side of the equinox the sun spends in our driveway, then will move on toward winter. 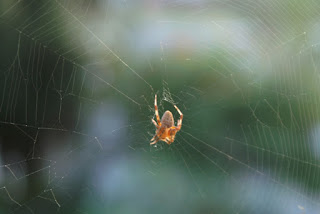 Meanwhile, spiders have ripened with the autumn and can be found hanging in mid-air, hopefully not by your face.  This orb weaver positioned herself below the acacia cultriformis tree at daybreak.  Insect and arachnid life is adapted to adjust life cycles to the changing seasons, many species becoming sexually mature in late summer and autumn and switching gears from feeding and growing to breeding and dying off, or aggregation and over wintering. 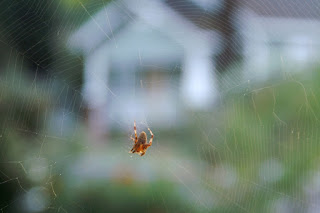 Humans, affected by the changing quality of light, pull out boots and sweaters even though the daytime air temperature still hangs in the high 80s.  We'll begin gathering things and stashing them away for the deep of winter. We light candles, hang wreaths, prepare our homes for the coming dark.  We drink pumpkin ale, celebrating the slightest hint of crispness in the now officially autumn air.
Posted by vanessa cardui at Wednesday, September 23, 2015