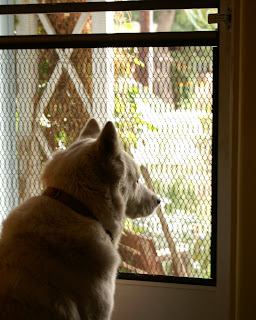 This is a dumb little story of a trivial thing that happened in my unimportant neighborhood on October 12, still remembered by oldsters like myself as the day Christopher Columbus' expedition made landfall in the Caribbean and formerly celebrated in the US as Columbus Day, Monday holiday bill and the dubiousity of Columbus' fame of discovering America notwithstanding.

It was a Friday and I had set the dog to keep a nose out for the trash guys while I was getting dressed. She didn't say anything, but I heard the sound of a large truck in our street. Oh shit, I thought, because I still wasn't fully dressed, and this being the day after trash day the green waste bins were still full but they weren't at the curb. It's a short story: our city council had let the trash hauling contract to a new contractor (the infamous lowest bid); this was the second week of what was proving to be their training period on the ins and outs of collecting our trash; they had forgotten to pick up the green waste on our street the day before; however our still-full green waste bins had been moved when we parked in our driveway and would be missed by the trash collectors if that large-sounding truck was indeed them. 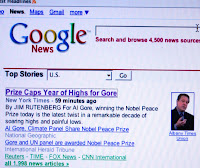 So I threw on some random clothes and ran to the door to find it was just the guy across the street having one of his several cars flat-bed hauled somewhere. After setting the bins right, I went back inside to see about the coffee, finish getting decent and check the news. Good grief! Al Gore had won the Nobel Peace Prize! Way to go, Al. A bunch of other stuff was reported in the news, but I don't remember it since I was thinking about taking a picture of the trash bins just in case I needed to raise hell at city hall . . . a picture is worth thousands of stuttering, soft-spoken words. I walked out the front door, camera in hand and sere 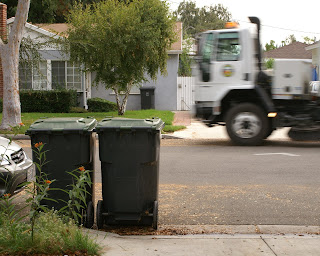 ndipitously another large truck was rounding the corner: not the trash truck but the street sweeper. Friday is, after all, street sweeping day, the day after trash day. Unfortunately on this day nearly everyone on the street had their green waste bins out in the street and so the sweeper swooped by in a mostly perfunctory way, leaving waves of leaves and elm seeds and misplaced scraps of people's trash in its fume spewing wake.

The green waste did eventually get picked up by the third big truck dispatched just for our neighborhood (the next street over got skipped too, but sharper-witted residents there had called to complain earlier Thursday, so the collectors sent a big truck out Thur afternoon to rectify). Whether the green waste actually gets composted and used in a useful way is another story altogether.

We have a long way to go toward environmental honesty and effectiveness in conservation. One of those compact fluorescent bulbs recently caught fire (actually, some posts on Blog Action Day/Environment pointed me to some info, and I found out the meltdown we experienced is a planned end-of-life event for CF bulbs!) in my daughter's bedroom. Aside from being scary, it filled the house with toxic smelling fumes (and no one seems to know whether the smoke is particularly harmful to humans). Since the dead bulb is too toxic to throw in the trash (contains mercury) I should save it for the day when I'm driving 12 miles to the toxics dump station? (I guess my point here is: CF bulbs are touted as being world-savers. My question: why aren't LED lights widely available for residential use yet? They are way more efficient, don't have heavy metals, last longer, don't produce heat . . . and you still have to buy them from some obscure geeky source located in Timbuctu) 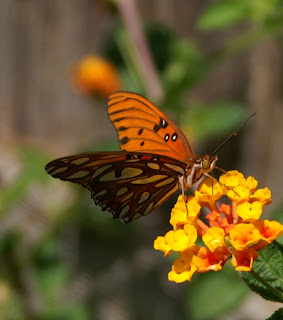 On Blog/Environmental Action Day, what to do to keep heart? Go out into my little slice of earth and discover the swarm of brown widow spider egg sacs on the fire hydrant in front of the abandoned auto repair place on the corner; hasn't been occupied for years because no one can afford the necessary environmental cleanup costs and the city won't pitch in; and think "This would make a good community center or mini park!" Walk to a nearby second-hand shop and purchase an article of clothing made originally in China; the trip is a lot shorter. See a butterfly glide out of nowhere and alight on my wildflowery weed-patch parkway strip; because who can want to harm a world where butterflies can live? Check my carbon footprint (less than the average Canadian's!!), then watch the movie Baraka on a hand-cranked laptop and be reminded how much the effort to reduce humanity's negative impacts on the earth could be worth it.
Posted by vanessa cardui at Monday, October 15, 2007