Return to the Hilltop 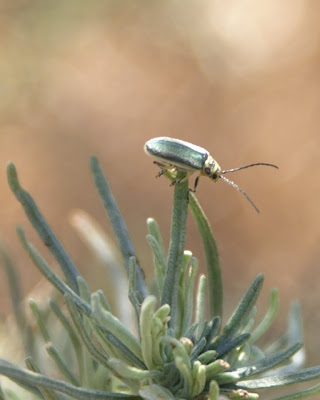 So we woke up an a subsequent Sunday with a mission to walk hard uphill and hopefully find adult trirhabda beetles, the life-cycle terminus of the larvae seen here. As you know, this genus of beetles features metallic green larvae that feed on leaves of various shrubs, and up to five species are likely to be found feeding on Artemisia californica, the host plant where we found our larvae. Maybe if we find some adults, we'll be able to identify the species. Maybe it will be a really nice walk up to the top of the hill.

Our hopes were dashed when we arrived at the jam packed gate 6 parking lot full of people who got up earlier than we did; the parking along Laguna Canyon Road was also full and so with our tails between our legs we drove off to look for some undefined elsewhere to walk--forget about the beetles for today.

There was plenty of empty parking spaces at the Reef Point lot, the beach-side southern end of Crystal Cove State Park. It was refreshingly empty on the beach, and interesting to explore the fading remains of the mobile home park that once was there. We walked down to Coney Island, I mean, the cottages at CC where all the people were congregated under wool sweaters, big umbrellas, the Ruby's Diner roof, or under the influence of cocktails with tiny umbrellas. Tourists. After visiting the facilities, we 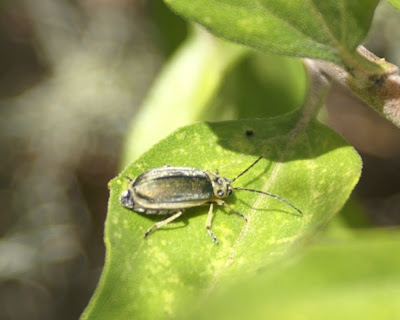 climbed up the stairs to where the Date Shake Shack used to be and bought an ice cream and a hot dog. Then continued down an asphalted path between Highway 1 and the bluff drop off.

Along the path were plenty of Artemisia californica. After the ice cream was gone, I had my eyes peeled for bugs. And suddenly I noticed a shadow on the underside of an encelia californica leaf. A couple of green metallic beetles! But E. californica is NOT A. californica, and remember that tr 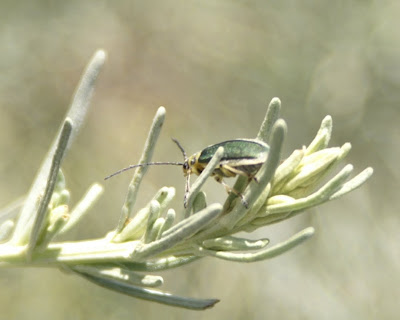 irhabda is a picky little devil when it comes to host plants. Mr. Cardui, in the meantime, had meandered a bit further down the trail and shouted out: Here They Be! And sure enough, a small patch of California sagebrush at the top of a bluff turns out to be loaded with adult trirhabda beetles. This patch is about 3.5 miles southwest of the hill where we found the sagebrush full of larvae, and about 800 feet lower in elevation. Same species? Impossible to know at this point.

Laguna Coast Wilderness Laurel Trail: I'll Be Back. But not on a weekend. 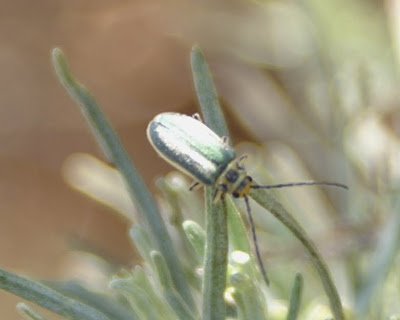 Hey, do you think these are the adults of the green beetle larvae I saw in this post?

I think your larvae are definitely trirhabda; which species, who knows? On Arthropods of OC http://nathistoc.bio.uci.edu/coleopt/Trirhabda.htm , see Trirhabda geminata photographed by Ron H. at the Nix Nature Center. Very similar, except it's not clear that t. geminata feeds on artemisia. It looks like the specimens shown are on encelia californica.