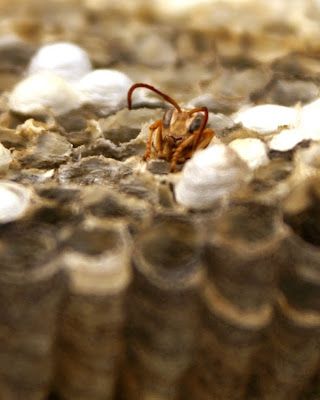 The end of summer spelled the bitter end for the paper wasps (polistes apachus) on my porches. Through July and into August their population and nests have grown steadil 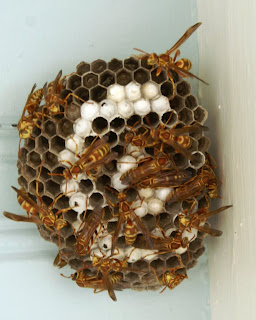 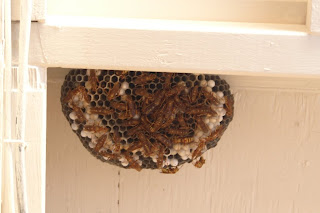 On July 1 the nest on the front porch measured (approx) 9 cells x 11 cells, growing to 13 x 18 by the end of August (photo with baby blue background). I haven't told you about the larger nest on the back porch (thinking maybe you'll think I'm crazy?); it measured 16 cells x 24 cells when the spray of doom hit it (photo with pinkish background).

A peripheral view of the large number of adult wasps taking on the alert position in unison as anyone passed underneath had become alarmingly nightmarish. 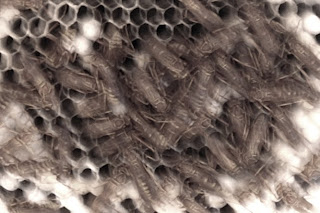 Not only were the wasps becoming scary, but they were also making a mess. For a week or so, a growing number of dying wasps had been falling from the nests, spending the end of their lives struggling for a foothold directly in our footpath to and from the front door and the door into my office. Not good, for one of those female wasps, weak though she might be, could still sting the unwary and unshod foot. Larvae, cell caps, and nondescript white gooey 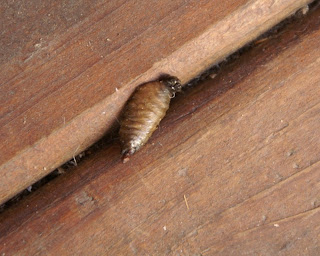 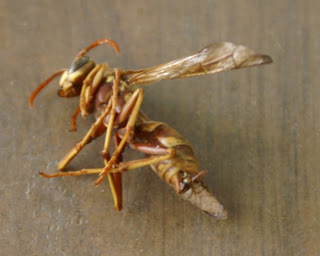 wasps to form an unpleasant deposit below the nests. 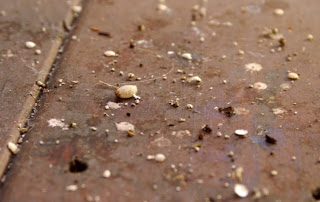 Mr. Cardui, inspired by a fresh autumnal breeze maybe, decided to clean up this mess by applying Wasp Freeze to the nests while I was busy painting the offspring's room. This is a somewhat risky undertaking since the wasps become very annoyed and can attack their attacker. Being a professional, however, he prevailed without incident and the wasps and their nests 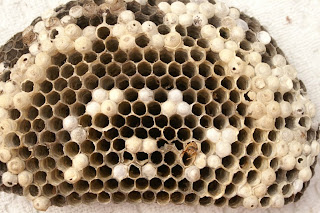 were dispatched from the house. He took the time to count the number of adult wasps from the larger nest . . . 50 . . . and saved the nest for me to have a close up look at.


There were larvae of various stages of growth still gawping inside their cells in the unfamiliar sunshine, and this one adult caught and frozen in the act of emerging from her cell. 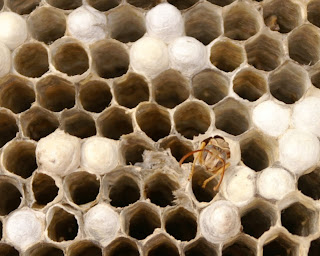 emale to a thriving (and scary) population, that it's hard to stop the nests in spring when it should be done. No one has ever been stung by these wasps on my porches, but it seems foolhardy to allow the nests to develop to such alarming proportions. Still, the wasps provide valuable caterpillar control services in the garden up until their colony's life is prematurely ended.
Posted by vanessa cardui at Sunday, September 05, 2010

Whoa. This is beyond fascinating for so many reasons! Wasp Freeze?! Will the larvae still inside the nest hatch? Is that nest just the gosh darn coolest thing ever?!

Yeah, wasp freeze is an aerosol can of pesticide that has a tightly focused stream. The larvae soon die if the pesticide didn't get them, since there are no adults to feed them. I assume the pupae inside the sealed cells may emerge, again if not affected by the spray. If these were reproductives, it's possible they could fly off, find a mate, and carry on the nest's life. The eggs, as well, would likely hatch into tiny helpless larvae, but to no avail.

Wasps are always interesting. Will you let any beginning wasp nests stay on your porches next year?
Cynthia