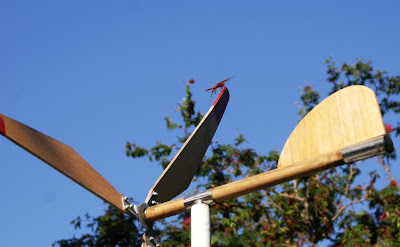 I bought this propeller/wind vane thingy at a yard sale one day and Mr. Cardui mounted on the fence-that-is-likely-to-fall-down-in-a-wind-someday-soon; maybe as a talisman against said misfortune, but maybe just because that was the best clear air in the back yard. There is no way he would consider putting that thing anywhere but behind the 6 foot fence. Anyway, the quirky wind vane/airplane thing looks cool but never spins either because we don't have that much wind or there is too much resistance on the rotating parts. So the other day I was walking by under it when--Squirrel!--my attention was grabbed by this dragonfly on the highest point of the highest blade. 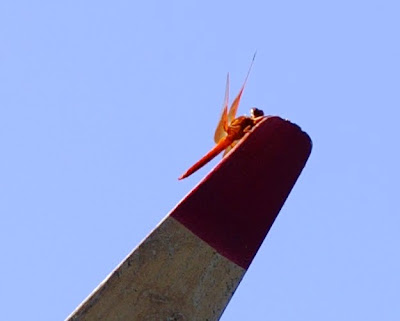 Dragonflies favor tall posts in clear air to perch on waiting for their prey to fly by. The prop fills the bill nicely; it's tall and sticks way up there (about 8 or 9 feet). As I looked on the dragonfly captured numerous tidbits and sat on top of the prop chewing them.

Hopefully the prop won't ever spin; in that much wind the fence will surely fall 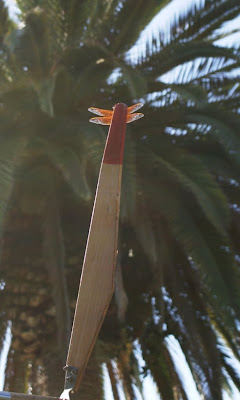 and that will be the end of an ideal dragonfly perch, among other things cool and mundane.
Posted by vanessa cardui at Saturday, September 04, 2010

Make sure the propeller doesn't take off carrying the dragonfly & the fence with it!