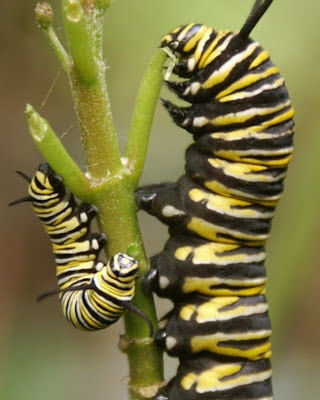 Hello there.  It's a nice chilly 57 degrees here with light rain off and on.  We've had a week or so of intermittent rain and overcast and so I'd say it's looking a lot like spring.  Yep, this time of year is when our hills green up, the mallow seeds sprout (photos later), the holiday lights go up (photos later) and of course the monarch butterflies go bonkers.

I was out back checking on things (wasting time I should be shopping?  NOT) when I couldn't help notice the milkweed dripping with fat soon-to-pupate monarch caterpillars. 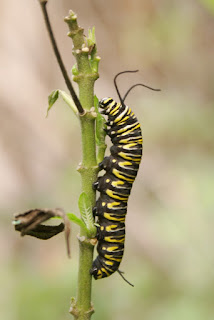 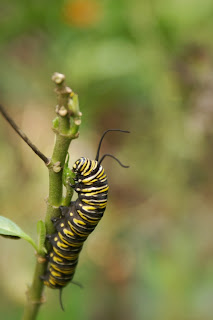 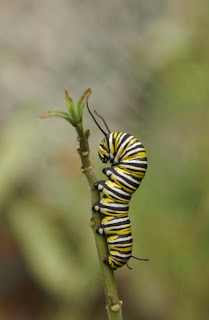 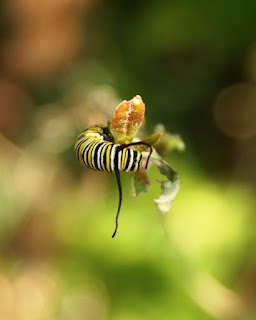 There were some small half-pint caterpillars too.  On one branch the two stages met.  You can appreciate the difference a few extra weeks of eating makes in the relative sizes of the two caterpillars seen here. 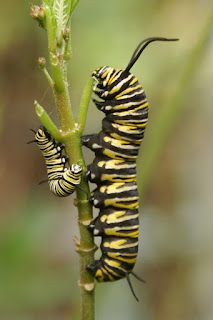 The monarchs eat a lot and can completely or nearly defoliate the plant they're on.  Meanwhile the oleander aphids proliferate in huge numbers and help in the defoliation process.  Also, I suppose, the depodding.  You can see lots of alar (winged) aphids on the seed pod. 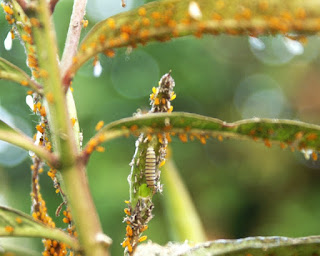 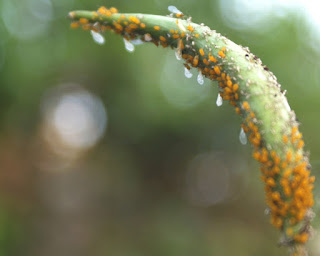 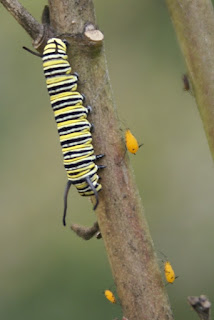 I found two small caterpillars on this nearly leafless plant; one I relocated to a more lush feeding ground.  The other one, seen here heading toward and then eating a tiny leaf bud or nub covered in aphis nerii, I left alone.  I'm sure it will be able to find enough to eat, even if it has to climb down to the ground and up another plant. 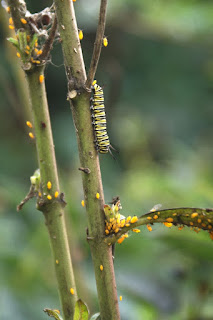 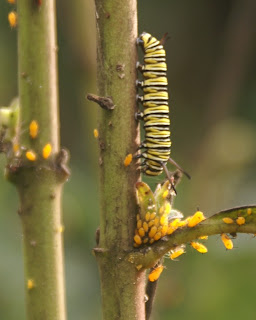 I also found a monarch chrysalis that has turned transparent so the orange of wings can be seen inside.  Soon to eclose for sure.  It's hanging in the bronze fennel, former home of the anise swallowtails.  Monarch (and other) caterpillars do often go travelling when it's time to molt and pupate, and I more often find pupae in plants other than milkweed.  That's a drop of water there among the gold spots, by the way. 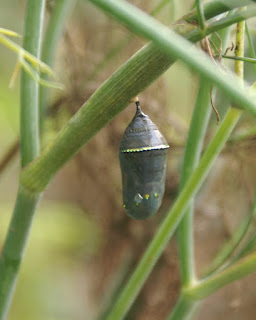 I went back for another look this morning--still pupating--but found a different floppy-winged, recently-eclosed butterfly clinging to some grass along the path.  It looked weak.  Cold and drizzle seem like an unlikely recipe for butterfly success. 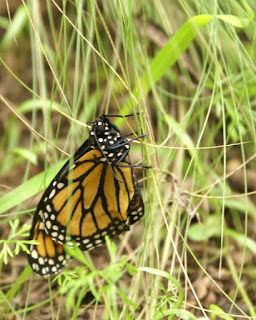 Heading back to the house I saw this caterpillar gone wandering among the agapanthas.  It is surely searching for a pupation spot, likely to be up on a woody stem of the phlomis, same plant where other monarchs have pupated in seasons past. 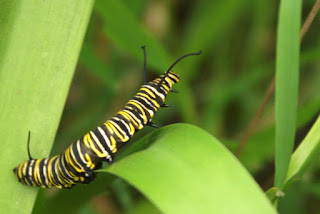 You can see its searching behavior in this photo, where the caterpillar clings with its prolegs and stretches and waves its body back and forth in an effort to make contact with suitable substrate (based on texture? firmness? orientation to the horizontal? what?) to pupate upon.


Near sunset I went out to check on the butterfly's progress.  It was lying in the path motionless.  I picked it up and in a few moments it started to move.  So I took it inside where Mr. Cardui was building a fire in the woodstove.  The butterfly was soon able to climb to the top of a twig I placed inside a wine box and seems to be resting, nestled in an upper corner, for the night.  We'll see if tomorrow brings sun and butterfly first flight. 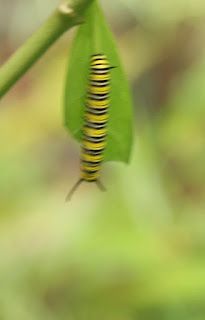 Thanks for the pictures and for the information.

How well do monarchs that emerge this time of year generally do? Do you know?

Seems the wrong time for monarchs to hatch- is this wildly unusual for S. Ca?
Cynthia