Attack of the Amphipods 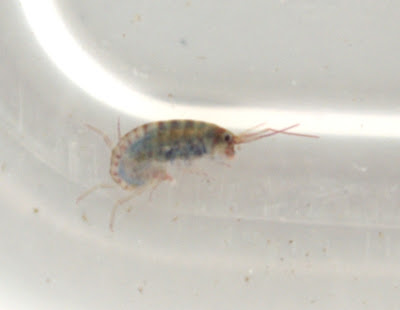 Yesterday I visited my mom's place in Laguna Woods, and she showed me her Tupperwares, pitchers, buckets and plastic deli food containers out on the patio filled with rain water (Yay!) and small shrimp-like critters (#@!Bugs, she says).  There were quite a number of them in these containers which were up off the ground on small tables or plant racks.  Some of the shrimp-likes were dead, some of them crawling around the bottom of the containers.  There were also some of them dead or near death on the indoor/outdoor carpet of the patio and a few on the concrete walkway.  What the heck?  I took a few photos with my phone but they are unprintable.  I took a pair of them as a sample in a Beneful Beef Stew container (very handy lidded containers even if food fit only for spoiled dropkick dogs, btw) and went home to the internets.

So I started searching for info, and got no further than typing "shrimp-like" when the species Talitroides sylvaticus came to my attention.  This is a shrimp-like crustacean belonging to the order amphipoda, commonly known as Lawn Shrimp or House Hoppers.  They are apparently very common in Orange County, sometimes becoming pests when they enter homes in large numbers.  They are about 8mm in size, flattened laterally, colored brown with a shiny grey green sheen, and inhabit shady damp landscape areas with access to damp soil and decaying organic matter that is their food.  They move by springing on their hind legs.  Several sources note t. sylvaticus are often noticed after a heavy rain when their habitat becomes flooded.  Similar to earthworms the lawn shrimp are sensitive to excessive moisture and they leave the flooded landscape seeking drier conditions.  Then they become too dry and die; after death they turn orange kind of like, well, shrimp. 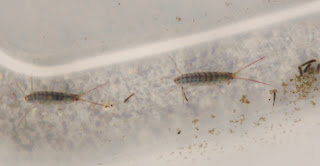 I took a look at my specimens.  The bigger one is close to 8mm; the smaller about 6mm or so.  They are shiny blue grey to my eye, with reddish antennae (4 of them) and legs (um, didn't count those).  They don't stay still for long, scooting or scuttling around and around the bottom of the container.  From time to time the two meet on their travels and interact by laying on their sides and moving their antennae around.  I never see them rise to the surface of the water.  They seem content in, or at least adapted to their aquatic environment. 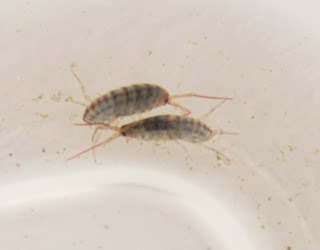 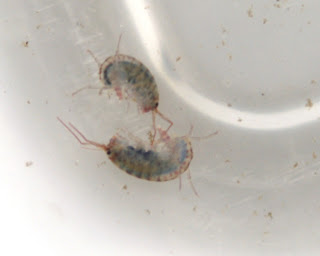 Lawn shrimp are described as terrestrial amphipods, and are sensitive to changes in the moisture in their environment, poorly equipped to control their internal osmotic balance.  These two swimmers in the dog food container do not look like terrestrial creatures.

Freshwater aquatic amphipods include two likely species.  Hyallela azteca is common in freshwater environments in our area and throughout north America.  They are laterally flattened, variously colored shrimp-like creatures that feed on algae, diatoms and organic matter.  They are typically 2-3 mm long, much smaller than my specimens.  Gammarus is a genus of freshwater amphipods of various sizes commonly used as fish bait and turtle food.  This post at Backyard Arthropod Project has some info on these and pictures of some found in a stream in Michigan.  I especially related to the description of the mode of locomotion, very much as observed in my pair of what I have become to call Mystery Shrimp.  The name amphipod means different footed, meaning these creatures have legs with different forms used for different functions:swimming, crawling, hopping. 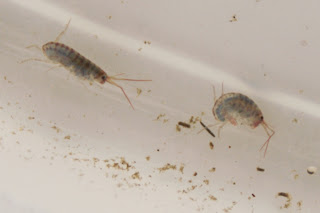 No matter which of these species is most likely or even correct, it is still unexplained how they got where there were found.  If they are Lawn Shrimp, how did they hop out of the landscape, over or around a 6 foot block wall and into pans and bowls placed not less than 18" off the ground.  If they are aquatic amphipods, the possibilities seem fantastic:  Maybe they were picked up from a nearby body of freshwater by a waterspout in the recent storms and magically happened to rain on my mom's patio (this sounds extra crazy but I read a news report of marine shrimp raining on a San Diego suburb, maybe an urban myth, though). 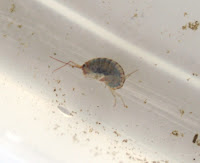 There is a balcony above my mom's patio and above that a roof gutter.  Hmmmm.  Maybe the shrimp-likes (whichever species) were living in a semi-clogged roof drain, feeding on the detritus there moistened by a recent rain and were washed out by Tuesday's downpour, onto the balcony and my mom's porch below.  Except, how did they get there in the first place?  A bird could have carried a female with eggs up there and dropped it, I suppose.

Maybe the people above now or once had pet turtles and fed them gammarus; the amphipods bred and bred and their containers overflowed in the rain. 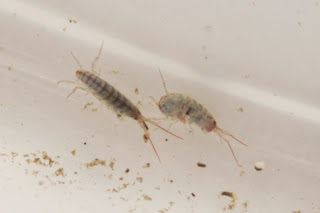 Any and all guesses or theories will be most welcome.

Dec 15 update and (in)conclusion:    The two amphipods in the Beneful container continued to swim/crawl/scoot around and defecate (did they also consume?) until 10/26 when one of them died.  It turned pinker after death and very quickly become mush.  The second one survived another 3 days until the 29th.  Here is a photo of it post mortem in which you can see it is appreciably pinker. 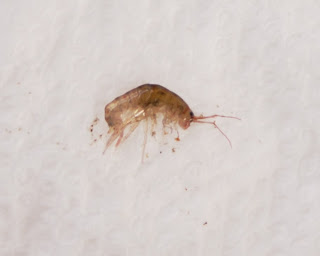 Meanwhile in Laguna Woods, on 10/25 there was more rain and mom reported amphipods appeared on her patio.  Since then she hasn't seen any more.  Also, after surveying the neighbors, she found none of them had seen any wayward shrimplike creatures, or at least they weren't willing to admit they did.  Mom also reported the shrimp attack to the maintenance department in her community; they basically said, "For goodness sakes!  Umm are they harming you?  No?  Well just leave them alone . . ."

So.  It's my sense that the circumstances (appearance after a rain, near a lawn, species commonly found around here) of the amphipod appearance points to Talitroides sylvaticus; however the description of the species as terrestrial and also ill-equipped to regulate its osmotic balance does not fit with my two sample individuals living in seeming comfort for days (after all, how long is the lifespan) in one inch of water.  I think these could have been aquatic amphipods, maybe gammarus, living in the clogged roof drain above my mom's porch.  How they got there . . . I don't know.
Posted by vanessa cardui at Thursday, October 21, 2010

Attack of the shrimp! I wonder if the pest control company would believe it if someone called them about a house overrun by shrimp...

Hey thanks for that. I had the same experience this morning in my contains for collecting rainwater. I think the most likely explanation, weird though it is, is that they come down in the rain having been somehow made airborne.