From the Archives 2006: Cassia Blooms 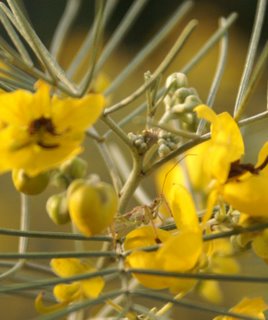 I've decided to revisit some unpublished images from last year during this first month of lucky 2007. There are lots of various goodies, such as bug species I've never posted on, a few oddities, and nice flowers complementing the bugs too. So here goes:

January 29, 2006: This is our old friend the assassin bug, genus Zelus, stalking prey among feathery cassia, Senna artemisioides. This plant is well worth growing in California gardens since it blooms profusely in the dead of winter, that is, the semi-cool period from December through, oh, 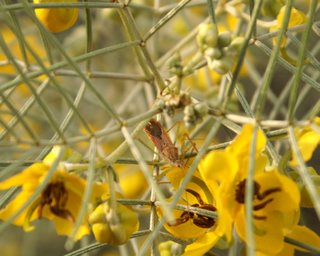 about March when we start heading back to the beach. After it blooms, seed pods form which turn shiny black and hold until you prune the plants to shape in November.
Posted by vanessa cardui at Monday, January 01, 2007