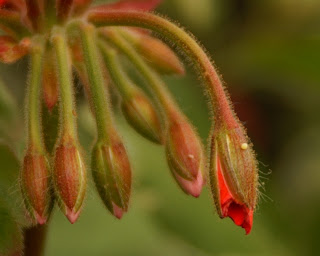 These small yellowish eggs are on the geranium buds right now. The question is, are they corn earworm (helicoverpa zea) or are they the closely related helicoverpa virescens (known as tobacco or geranium budworm in the common tongue)? According to the literature on helicoverpa, H. zea prefers corn and sorghum over all others, but will use a large selection of other plants, including geranium, as larval food when corn isn't available. It's typical for corn earworm moths to lay eggs on these alternates early in the season, switching to corn in summer. H. virescens, in locales like Tustin where no tobacco is grown, will use its alternates (including marigold, ageratum, nicotiana, impatiens, and geranium among many others) throughout the reproductive season. OK. These eggs and caterpillars show up on my geraniums in spring, but by mid-June there's no sign of them. It's tempting to think they are the aptly named geranium budworm but based on the pattern of infestation, I'm inclined to believe they are h. zea, slumming in my geranium patch until the neighbors' corn starts putting on silk.
Posted by vanessa cardui at Tuesday, April 17, 2007