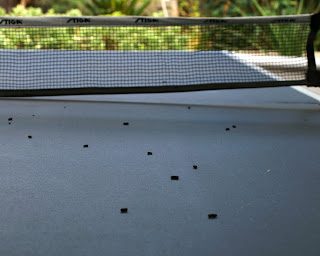 My husband is righteously paranoid about rodent infestation. What I mean to say is he is The Guardian of the Wires. Once we had field mice invade our office (a rustic affair with doors opening to garden and seed storage areas) only to gnaw on the computer wiring as is their nature. This situation caused a lot of havoc and inconvenience, leading to certain rules.

His #1 rule is: No Eating In the Office so as not to provide undue attraction to hungry rodents. Rule #2: If you see poop, report and identify. In other words, keep your eyes peeled for evidence (usually poop) of rodents and report same promptly to The Guardian for verification and identification. Rule #3 of course is trap and bait swiftly and often.

So, my husband noticed some poop on the ping pong table. It was tiny poop, and taking a cursory look at it I allowed it could be very small mice. Very small acrobatic mice, since the table is at table height with no convenient overhangs to jump from. And, the back of my mind kept nagging, Why would mice hang out on a ping pong table?

Bait was set out, each night the table was swept clean, each morning new ever larger poop appeared. Eventually my husband started sweeping off the table in the morning, too, and what do you know? Poop appeared in mid-day also. 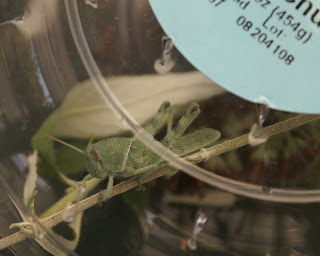 You're probably guessing what I should have known all along. Near the ping pong table are some buddleia that were planted in June. I had a look at them and found some beautiful bluish grey grasshoppers (among other things) peacefully chewing the leaves. I captured one of them in a Trader Joe's pineapple chunk container, and left it with some leaves over night to see wh 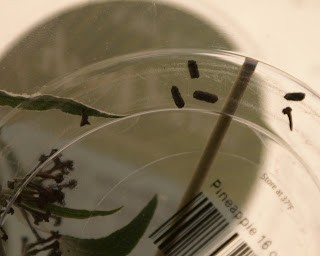 at, ahem, emerged. Sure enough, the grasshopper's poop matched that on the ping pong table. Poop mystery solved.

Those buddleia were bought from a production nursery in Orange. The grasshopper eggs must have been in the container soil, and they hatched after planting. I am not sure what species they are, but they have not been seen in our yard before. Man continues to prove his/her worth as a formidable agent of insect dispersal. 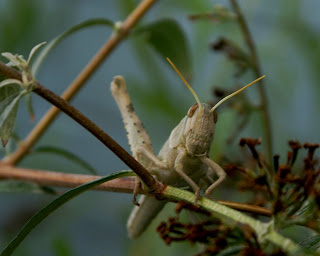 Why the grasshoppers are attracted to the ping pong table I don't know. It's fun to visualize them jumping around up there, though, first one side of the net then the other bouncing back and forth making points and poop.
Posted by vanessa cardui at Thursday, August 30, 2007

That's my favorite local grasshopper species, the gray bird. The nymphs are masters of color-change, and the adults are those big brown things you tend to see everywhere. I think sometimes they use their hind legs to flick away their poop, which might explain how it gets on your ping pong table.

It might be fun to hit that buddleia plant with the hose, just to see how many grasshoppers come jumping out!

Just found this posting via Google, and found the story, and the photos, especially useful!

My story: my wife and I spend most of a hot Sacramento day last weekend cleaning a rug, and, after a few days of hanging to dry, laid it out flat. When I went out the next day to roll it up, there were little droppings all over it. Crap! (pun intended.)

I, too, first thought it was mouse droppings, and didn't relish the thought of re-cleaning the rug. As I thought about it, though, I wondered if it might be grasshopper poo. After all, the patio is right next to the herb garden, and is full of 'hoppers.

Happy to help, and thanks for sharing your funny story. Who knew that one day a person could type "grasshopper poop" into an electronic box and actually get information out of it. Crazy, great world we're living in.

OK, I am so glad you posted this. We have had a poop mystery around here as well. I thought a rodent was eating some of our veges in the garden my son and I planted. SO I ripped it all out. The exterminator came to set traps to no avail! It looks just like the doody you posted and I have seen some grasshoppers....Who would have known???

Again, so very happy to be able to help with poop mysteries!

Thanks for this thorough documentation! My husband found a mystery poop on top of our bathtowels on the towel rack in the bathroom and we were baffled until I discovered a huge grasshopper in our bedroom (which is right next to the bathroom). Your account and photos helped us confirm our suspicions and solve the mystery!

Hmmm. Grasshoppers in the bedroom: my kind of people. Glad you solved your mystery.

Just another person very happy that you did this study on grasshopper poop. Mystery solved! :)

A grasshopper woke me up this morning, I escorted him out the window (most likely the same way he got in) only to find his “business card” on top of my computer. I can hear the vandal and his friends laughing about it outside my window right now.

After a quick search you have confirmed my suspicion. Almost three years since the original post and it is still solving grasshopper mysteries.

Thank you and greetings from Norway.

P.S. Having a grasshopper wake you up, although they are effective they are also very unreliable as there is no way to set a time. I can also think of more pleasant ways to wake up.

I hate it when people lift other people's work and don't bother to ask or even give credit. As an artist, Cristina McAllister should know better. Just found my photo heading one of her posts on Grasshopper poop, check it out:
http://people.tribe.net/mcallisterart/blog/eea28f7c-80c3-494f-8466-9620d6ea1026
I mean, couldn't she take her very own grasshopper poop photo? Lame, very lame.

okay - so I went to that site, and a comment there states that grasshoppers do NOT poop - hmmm - now I am concerned - I have a "hurricane casualty situation" in that we brought plants inside, not realizing that we invited grasshoppers also, and then evacuated the area, only to return to poop everywhere! I"m really thinking it IS from from grasshoppers...looks like your pic, but some a little longer altho narrow cylinders in shape...We've escorted the grasshoppers from the premises, so I guess if no more poop appears, the mystery will be definitely solved.

And here we are in 2012, and your post has helped me. I went out on my porch to find these fine presents all over my table AND all over my favorite potted basil plant. The only culprits I found were an earwig and, you guessed it, one HUGE grasshopper, sitting on the chair, laughing at me. Since the poos were pretty much the size of the earwig, I thought the laughing fellow might be the best suspect, and Googled to see what his poo might look like....and you guessed it! Here I am....and your pic confirmed it!Thank you!! :)

Found droppings similar to mouse droppings all over the floor, table, and boxes I had in an ecological cabin in Baja California Sur that I had left vacant for 3 months (October thru December 2013). A dead mouse I found in a sticky trap had left some droppings alongside the trap that were about twice the size of these other droppings which I should mention included many, many insect parts among the droppings that appeared to be the front legs (?) of grasshoppers or something. The only insects I found in the area on my return were praying mantis and grasshoppers. I wonder who in the food chain was eating whom? Odiseo