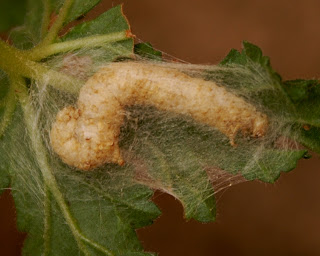 I attended a California Master Gardeners seminar last weekend. It was fun to hang around with a bunch of old gardening farts like myself. The first speaker, John Kabashima, gave a talk on Integrated Pest Management for garden pests but what caught my eye was his slide of a parasitized caterpillar. My immediate reaction was, Nice! Dr. Kabashima is the director of OC Cooperative Extension and would I like to spend an hour or so talking to him about bugs. Anyway, I went on to hear Pat Welsh chitchat about pruning and whatnot, and another lovely lady talk in a somewhat patronizing tone to us about succulents. Then I went to a party, and so on and ate bacon on Sunday morning, r 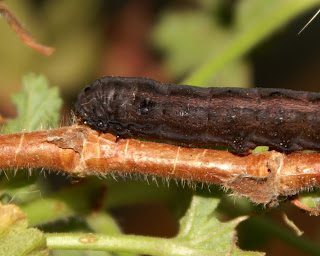 ead the papers, then the weekend ended and work interrupted and I had forgotten about the caterpillar until I was checking out why my potted geranium was looking so scruffy and found---what do you know?--two parasitized caterpillars on it. It never ceases to amaze how there's always something new to see, and the corrollary to that: once you know something exists you seem to see it a lot. Something to do with directed perception.

This parasitoid is a braconid wasp, which lays eggs on or in the caterpillar. The wasp larvae hatch, consume the caterpillar from inside and emerge as adult wasps after the caterpillar has coccooned. There was also one large sluggish caterpillar on its last legs. A few days later I checked the coccoons and found many small black wasps emerging. 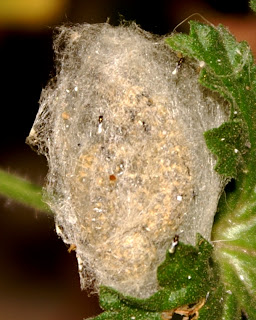 Too bad they didn't kill the caterpillars before they messed with my geranium but one of the mantras of integrated pest management is patience. And if I had been monitoring my crop of geranium (another key principle of IPM) I could have picked the caterpillars off by hand before their damage exceeded my aesthetic threshold.
Posted by vanessa cardui at Sunday, October 28, 2007