It's not so easy being yellow and black 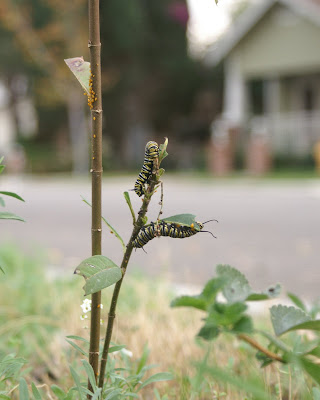 So, I'm obsessing about the monarch caterpillars maybe being picked off by wasps just as they are approaching pupa-hood. After the mysterious disappearance of the big one I check daily or even a couple times daily to see how they are doing. They move around quite a lot, sometimes from plant to plant. There is now a general ban on humans walking across the parkway to or from the cars to prevent us from inadvertently stepping upon one. I wonder if I should do something. You know, to help them. It rained last week, and the next morning I found one of the bigger ones off the milkweed. Should I help it back onto the food plant, or is the caterpillar wandering in search of a place to pupate? Two biggies were finishing off the last leaves and pods on a scrawny plant. Should I move them to a fresh new plant or leave nature to its course? I decided to move them by cutting off their stem perches and propping them next to another milkweed plant. But by the time I acted one of them was gone. The one relocated caterpillar immediately moved onto the new plant and started eating. The other one was: Preyed upon? Fallen off its plant? Looking for another milkweed? Pupating? That night it rained again. It must really be cold out there, especially without much food in the belly. Yesterday I found that missing caterpillar in a smallish feverfew plant looking scrunchy. Is it hungry, dying of the cold or getting ready to pupate? In moving a caterpillar you must make sure it hasn't attached it's rear prolegs to the substrate in preparation for molting. This one hadn't, and I got it to crawl onto a long piece of bark which I then propped up in a nice lush milkweed plant. Later in the day it had crawled up into the plant and was feeding voraciously. Am I messing with nature by my small interventions against the hunger of monarch caterpillars? I feel responsible for having invited them to grow in my dangerous yard.
Posted by vanessa cardui at Sunday, December 09, 2007

it's like adopting a dog - you invited it to your home so you need to try to help it live as well as you can. i feel sure that you have the knowledge to figure out what it needs you to do for it. we brought many monarch caterpillars home and watched them hatch very successfully in the blue ridge mountains- all that was needed were milkweed leaves, a quiet place, and the freedom to fly away. beautiful! cynthia