Weighing in on an Opuntia with Scale 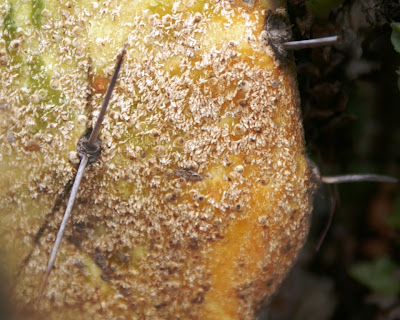 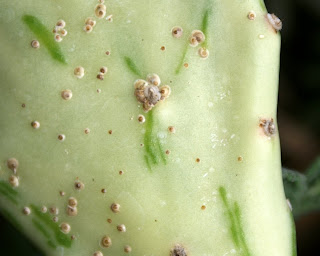 garis variegata) had some scale insects on one of its thin pads. Darn, I thought, better keep an eye on that. Looking a bit further, I saw the base of the plant was totally encrusted with white stuff which on closer examination proved to be scale also, surrounded by other-shaped crud that I thought might be scale, or scale-frass. These cactus get scale, I knew, although none of mine ever had yet so of course I wondered which species of scale this was. A search for "opuntia scale" returned a lot of information about Dactylopius opuntiae, the Opuntia cochinaeal scale. That's not too surprising given that cochineal scale is very common on opuntia, is raised as a cash crop for its brilliant red color, and was the subject of bug-sized controversy on the internets recently.

I knew that fuzzy-coated red-juiced scale is not what had infested my cactus. I turned to my print resources and found (from the Ortho Problem Solver 5th edition, 2004, Michael D. Smith editor) a picture that looked similar to my scale, captioned forthrightly "cactus scale", on what appears to be opuntia. The text gives some life-cycle information and further identifies the species as diaspis echinocacti, but also suggests there are other species of scale that infest cactus. Just to be thorough, I checked a second print source, U of CA's Pests of Landscape Trees and Shrubs (1994 edition, Steve H. Sreistradt editor) which lists three species most likely to infest (cactus, oleander, and greedy scales) and offered photos of the greedy scale and oleander scale (neither shown on cactus of any kind).

Back to the internets, where a search for (user whacks forehead with hand at this point) "cactus scale" points to this series of photos, confirming that cactus scale (the species Diaspis echinocacti, not the obvious, head-slap-inducing generic search term) is indeed the one infesting my plant and suggesting (but not clearly stating) those numerous smaller tubular shaped things among the larger round scales are another stage of development; immatures I suppose, but could also be the males although there seems to be an awful lot of them. So immatures is my guess.

What to do? Generally speaking, spraying contact pesticides on scale is not effective since their protective coverings shed water like a well-made roof and the chemical ends up killing the natural predators (lacewings and their larvae that generally keep the scale under control in my garden) which could bring the scale infestation under control. Systemic pesticides can work, but I recommend removal of the infestation before using any chemical control if possible. First, it feels so good to scrape off those little buggers. They can't move, so once they are detached from the plant they will die. By the way, a lot of the scale you see will already be dead anyway since they don't live forever but their little protective caps can remain attached to the plant for some time. Which brings me to the second reason to remove the existing scale from an infested plant: to monitor the ongoing or recurring infestation better. You can clearly see if there are new scale growing on the cleaned plant. If you decide to use pesticide, you will be able to judge it's efficacy by counting the numbers of scale before and after. These new scale will likely be coming from eggs left on the plant by the females you scraped off. Obviously, scraping off a scale infestation is only practical in the case of a small infestation. Larger problems can be cleaned off with blasts of water in certain cases. 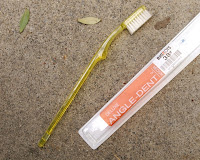 So I decided to scrape off the cactus scale, and see if a reinfestation occurs before deciding to use a systemic insecticide on this plant. My tool of choice for this job is a cheap toothbrush (pick your favorite color), medium bristle with an angled handle that turns out to be especially good for getting into those hard-to-reach spots around the spines.

These last photos show the opuntia after the scale are removed; OK, I probably missed one or two of them but who's counting? 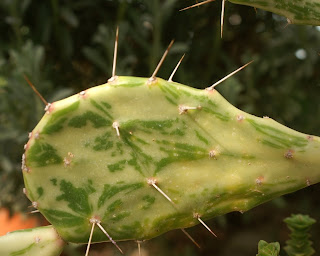 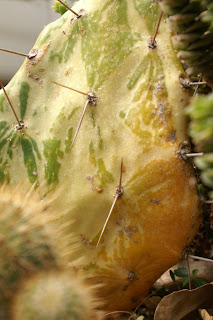 Interesting! I don't have an cacti, and I haven't seen any scale on my plants, which is nice. I also seem to have a lot of lacewings, so hopefully they'll do their job (and I am infested with asian lady beetles - maybe they eat scale along with aphids?).

Moe: UC IPM does list asian lady bird (Harmonia axyridis) as a predator of scale. Take care of them, and hopefully they'll take care of you and your plants.