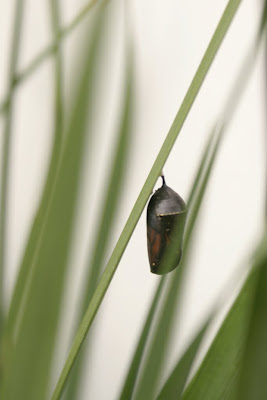 This year I counted bugs in the yards on Dec 22, which was a slightly breezy coolish sunny day following a rainy night. Despite our mild weather conditions, the pickings were slim:

1 Glassywinged sharpshooter nymph, Homalodisca vitripennis
6 colonies of Aphis nerii, Oleander aphid. These were small colonies just starting up.
1 leafhopper of the black persuasion, as yet unidentified. It was on the white white leaf of the brittlebush.
100 or so (who's counting?) Cactus scale, Diaspis echinocacti. These were by the way NOT found on the opuntia featured in the post about using a toothbrush to remove the scale. That plant remains scale free since Feb '09. The currently infested plant is a small cutting I started in a pot; now where is that toothbrush?
Just 1 lonesome L 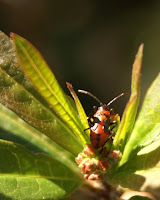 arge Milkweed Bug nymph, Oncopeltus fasciatus. What happened to all the others? and to round out the bug section: 2 leaf-footed bug nymphs, Leptoglossus zonatus, still hanging out on the myrtle fruits.


I think this was a very good summer for mantids. I saw 7 ootheca, presumably of Stagmomantis californica. Two of these were located on twigs of living plants; 2 were on the underside of the 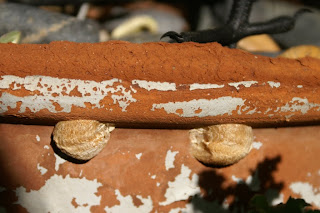 unpainted wood fence runner in the backyard; and 3 were on the lip of an old clay pot, just under the foot of the Mother Crow.

Under a white pumpkin on the porch I found just one small roach nymph, Blatta orientalis. Yay.
There were 6 or so lacewing eggs, Chrysopa sp, sprinkled on the myrtus communis compacta hedge.

While I was checking on Tough, the monarch caterpillar, a pretty red-eyed syrphid fly caught my eye. Nearby I found what appears to be an empty syrphid puparium, very likely to belong to the fly I saw. 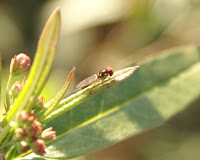 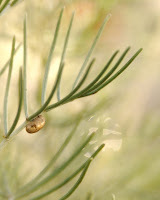 One solitary Trupanea nigricornis, the green-eyed picture winged fly that lays eggs in Mexican marigold flowers, was frequenting the Mexican marigold as you would expect but in unexpectedly small numbers.
There were a grand total of 5 other flies which I was unable or unwilling to identify. Too cold?

2 Asian ladybird beetle adults (Harmonia axyridis) plus 2 larvae were the advance troops against the explosion of the aphid colonies mentioned above.

8 or so very small ants scurried around when I moved a potted yam. Maybe these were Thief Ants, Solenopsis molesta?

The two caterpillars, Tiny a

nd Tough, continue to represent for Danaus plexippus, and they have been joined by lots and lots (120+) eggs. I also saw two pupae, and a couple of adults drifted by as I was counting eggs.
I saw a silk retreat or hideout which I suspect belongs to a moth caterpillar 
Then there were the SPIDERS: 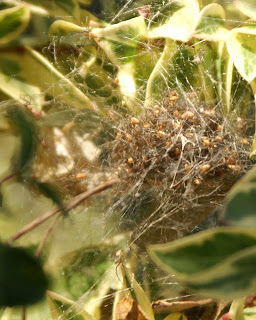 A nest of about 100 newly hatched green lynx spiderlings, Peucetia viridans was perched in the variegated myrtle bush. 2 other slightly older but still young lynx were found elsewhere.
2 trash web spiders, Cyclosa turbinada, were hanging around in the camellia trees. And one crazy whirligig mite, Anystis baccarum, rounded out the bug count as it ran around looking for other mites to eat.

That's all folks. This post was actually written on 12/27/09, allowing time for holiday festivities, introspection, photo editing, and loafing.
Posted by vanessa cardui at Tuesday, December 22, 2009

Wow! so much for counting those bugs. Some are a little bit helpful while others are really not, at all. This winter I'm happy to see the Camellias bloom perfectly.

Happy New Year to you and the denizens of your estate!
I'm looking forward to another year of your fascinating and clever writing and the very interesting and often beautiful photos that you so generously share with me. Thank you.
Cynthia