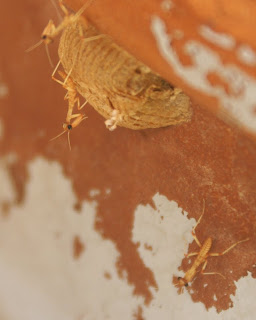 Back on May 31, I happened to notice a few mantises that had recently hatched from the left-most of the ootheca triad on the rim of the jade plant

pot at the steps to our front porch (seen here in the winter solstice bug count post). There were just 4 or 5 of them, still hanging around the old egg case in the late afternoon shadows.

Then, a week later my daughter alerted me to a whole 'nother batch of baby mantids emanating from the same oothecum. Again, I 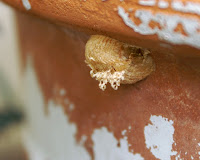 had missed the actual emergence but the white dangly stuff hanging from the egg case was evidence enough that they had come from there. These mantids are much darker in color than the first bunch . . . maybe the darker ones were older when we observed them. I find a lot of references to male mantises mating 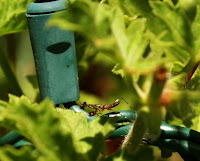 with multiple females; does this happen in reverse, which might explain differing traits such as coloration and incubation period between the two batches of offspring in the same oothecum. 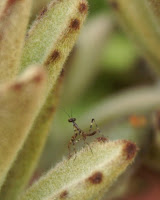 way, I did not know mantids could stage multiple hatchings like this. I found 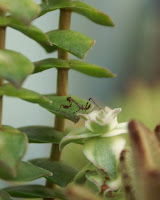 the babies in interesting poses and settings all over my succulent plants near the hatching site.

They move quickly and with agility, as seen in the three photos of one of them making a leap across a void between two leaves. 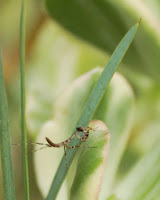 Last year and the year before, mantises hatched in April, so this is much later than our shaky statistics define as normal.
Posted by vanessa cardui at Monday, June 07, 2010

I have also witnessed these mantids hatching in 2 or 3 passes. My theory is that the weather conditions have to be just right, or the hatching stops, and the rest will wait a day or so. They also usually hatch between 9:30 and 10:30 am.

I think the darker nymphs were just a little older when you saw them, giving their skin the time to cure into their typical dark brown color.

They're SO TINY! I've never seen tiny baby ones. Thanks SO much for those pics.

Not to freak you out, but my aunt watched some hatching once, and the 1st hatched, then waited and proceeded to eat the subsequently emerging baby mantids.