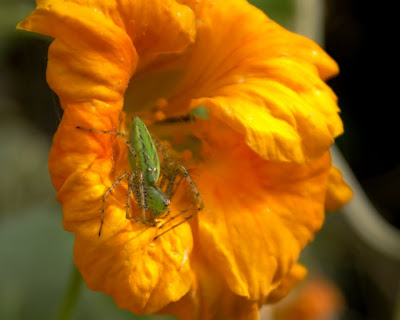 Here's a nearly mature green lynx spider hanging out on a nasturtium flower. So what, you may ask.

Our unusually mild summer has failed to beat down the cool-loving nasturtiums growing in a summer-sunny spot. The unusually cool weather seems to have slowed down the growth of green lynx spiders until recently as the warmer days have brought on a relative abundance of insects and a burst of growth in the spiders. So the convergence of Peucetia viridans in a later stage of growth with Tropaeolum majus in bloom was not a likely thing, and in fact has never been seen on these premises before now, the Unusually Cool Summer of 2010.
Posted by vanessa cardui at Monday, August 02, 2010