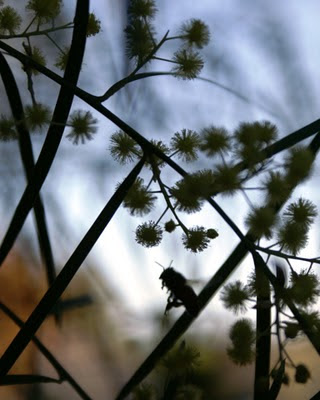 The acacia iteaphylla, willow wattle, fills the space where the ligustrum hedge (that follows the fence) ends and the porch begins and right now fountains of yellow flowers threaten to encroach the driveway and the steps up to the house.  From among this bounty of bloom on an early December morning (a sunny one a few days ago before the clouds and fog took over) came the roar of worker bees.  Seriously, there were so many of them there wasn't a wand of wattle that wasn't being tended by an early-rising bee.  From this I surmise: there is a hive of honey bees nearby, they are hungry, and acacia iteaphylla has the goods to offer.

Of course acacia is famous for its winter bloom.  This one, the willow wattle, has bloomed repeatedly this year with flowers that aren't spectacular but fill the air with sweetness, and honeybee song.
Posted by vanessa cardui at Thursday, December 16, 2010