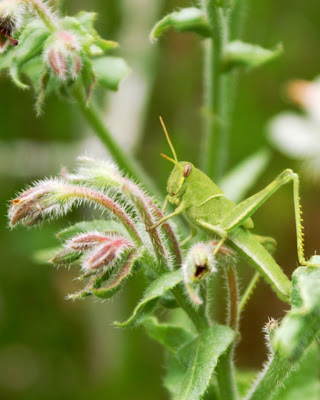 This bright green grasshopper (schistocerca nitens, I presume) caught my eye on top of a borage plant.
I suspect they have pretty good vision, at least detecting motion and large black objects well; this one moved away and sidled behind the bristly stem as I approached with the big scary camera. 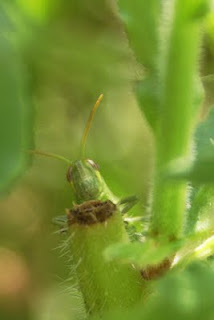 It appears to be a female and if so, has a lot of growing to do: bad news for those borage leaves.  Adult females often are 3" long; this one is just over an inch. 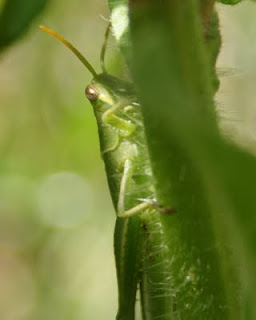 The nymph stages of the grey bird grasshopper are found in different and often bright colors; the very small ones are what I call focus free green:  it seems like their surface defies autofocus by means of its pebbly surface resulting in sub-par photos typically. 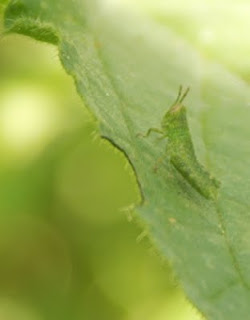 The adults make the final molt into winged beings that are mostly greyish brown, though not unattractive. 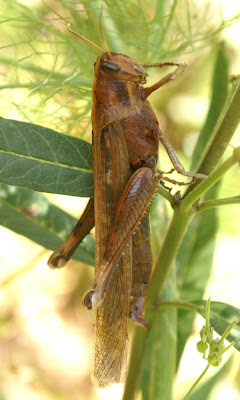 One day I found this very large and unusually bright brown female among the fennel stems.  Surprise, she was dead, a dried out husk of short horned hopper quite possibly the mother of the next generation shown above.  Does it make you feel uneasy referring to an orthopteran with inhuman starey eyes and hinged mouthparts as mother? 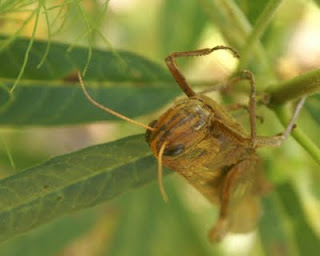 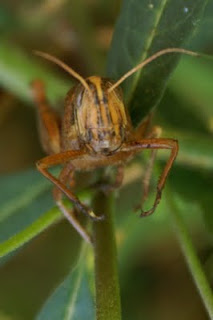 Still, this one undoubtedly mated and inserted her eggs into the good and seldom-disturbed soil in my garden under the phlomis.  Never visited by her offspring she ended her life clinging to a food plant; later a fly visits her carcass looking for a meal or a place to lay eggs. 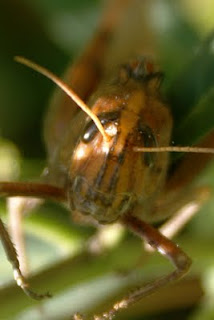 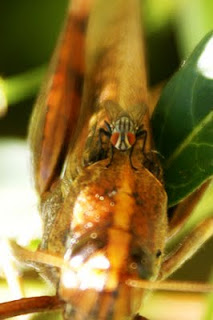 I too have noticed how a grasshopper will try to keep the stem between itself and the camera as if playing hide and seek.