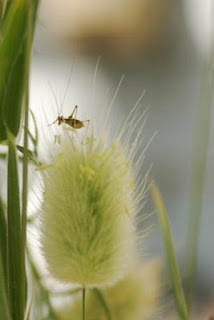 Mr. Cardui grew some Lagurus ovatus this spring from a packet of seed I picked up at the local nursery.

Bunny tails! have erupted all over them just in time for me to pot some up along with cosmos in a little meadow-like salute to summer along the driveway. 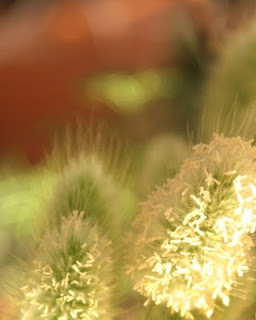 But what could be cuter than bunny tails is this tiny Mediteranean katydid nymph, , slowly and meticulously navigating the long awns of the grass flowers.  It's using its long antennae to investigate each step before taken, and with all that surface area of the flower parts it was a lengthy process. 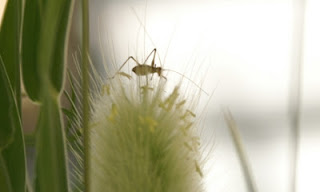 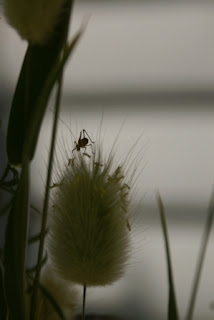 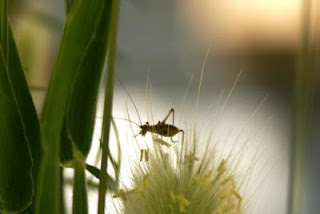 This katydid is the second or third type I found in my garden, and the balance is in the balance apparently because I see far fewer of the once common Scudderia furcata and more of the Mediteranean, along with an occasional Microcentrum californicum.  According to UC IPM (which considers these guys pests) P. nana lays its eggs inserted under grape vine bark.  I do have a Vitis californica growing on the fence . . . must investigate for egg-sign.

Along with the katydid I found some colonies of aphids tucked right up next to the flowers along the peduncle.  Pests, yes.  Let's see how long it takes the predators (ladybirds, syrphids, lacewings) to find them. 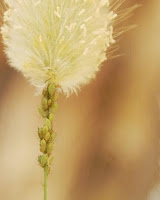 Bunny tails; they may be invasive like some other ornamental grasses.  Plant with care if your garden is near a natural environment; with relative urban abandon if not. 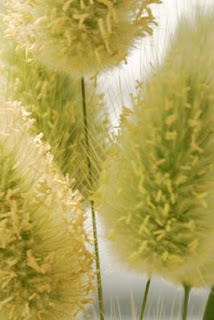 I forgot this spring but I usually grow at least one pot of them just because they are so cute. Little kids are delighted with them too.
Cynthia

Ha ha are you implying I am not a little kid?

It seems we both are!
Cynthia