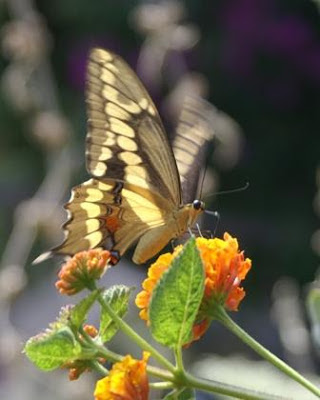 When I shop for paper towels at Smart and Final I'm always amused by the descriptive language used to indicate the roll size.  Giant, in paper towel parlance, is apparently only sort of big.  Giant is greater in size than regular but much smaller than Mega or Huge.

In the world of swallowtail butterflies that frequent my Tustin garden, however, the Giant moniker does count for something.  Giant swallowtails (Papilio cresphontes) are noted as having wingspans 83mm up to 140mm.  While the low end is smaller than the western tiger swallowtail, the top end blows both the tiger and anise swallowtail away.

These large butterflies rarely hold still enough for a photo, as mentioned before in these posts.  This time I was allowed to get quite close for a nice fluttery portrait of a nectaring P. cresphontes.

Now, I'm off to check the paper towel inventory.
Posted by vanessa cardui at Saturday, July 06, 2013

I like your odd sense of humor which often makes me smile.
Cynthia