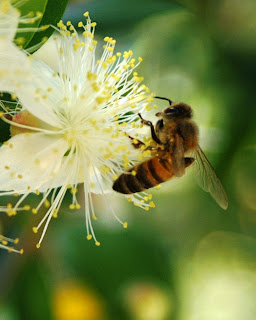 is in full bloom, and so is attracting "large" numbers of honeybees, which seem to mainly use the blossoms for pollen. There is a lot of talk this spring about the decline of honeybee numbers relative to prior years. Due to the news coverage of colony collapse disorder, our general awareness of honeybees is rising in response to and concern over this unsolved threat to their existence. Do we really know how many bees frequented our flowers last year or the year before, or 10 years ago?

I remember a couple of years ago, when I was getting seriously into photographing and documenting the insect life on my property, I caught myself subconsciously dismissing honeybees as ubiquitous, bordering on boring. As in, nobody would be interested, actually am I even interested, they're just honeybees, I'm really more into something new or (hopefully) exotic.

Having taken apis mellifera for granted, can one say in a definitive way whether there are more or less of them in our vicinity this spring than previous springs? Like when the weather turns ugly-hot just about every summer, people can't recall it ever being that hot. Without weather people and climatologists compiling (boring, day-in, day-out) temperature records, we likely would have no idea what is going on with our climate because our observations are by nature subjective. 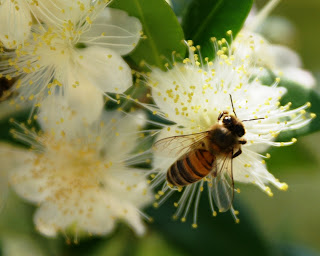 My apologies, honeybees. No creature should be taken for granted, but especially not you hard-working pollinators. It's hard to count you gals, but I will try to document with some degree of accuracy your relative numbers among the flowers through the seasons and the years.

According to this article in the OC Register, the Orange County Beekeepers Association will help you out with a wayward bee swarm. Instead of killing the swarm, or having someone else do it, consider contacting them for a swarm rescue.
Posted by vanessa cardui at Tuesday, May 29, 2007