Near the end of April, I noticed some bug nymphs that were new to me. I kept an eye on their development, until they emerged as adults during last week. The helpful and kind people at bugguide pointed me towards their id: Niesthrea louisianica, a scentless plant bug. This species feeds on flower parts and seeds of plants in the mallow family. It seems my thriving Indian Mallow (Abutilon palmeri) is as good 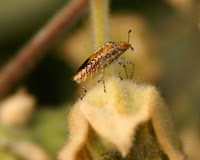 at attracting interesting bugs as a porch light.

The first two photos are views of the adult bug. The next two are stages of the nymph. The very young nymphs I saw back in April were solid red with dark red (or maybe black) antennae. Both the nymphs and adults are slow-moving. When I disturbed an adult, 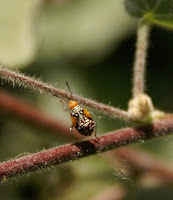 it did a death-drop off the leaf it was on instead of flying away.

Cute as they are, I haven't yet found any reference on the distribution of this species in California. Apparently they are not much of a problem to farmers or 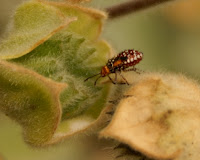 horticulture; and, as everyone knows the squeaky wheel gets the press.
Posted by vanessa cardui at Monday, May 28, 2007