What's in a Name? V. annabella! 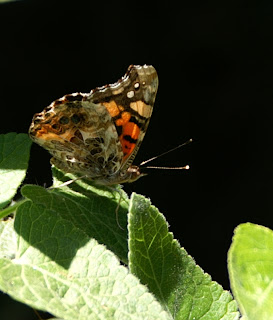 On what I thought was a whim, I chose to be the virtual namesake of a pretty little butterfly: Vanessa cardui. The butterfly itself, commonly called the painted lady, was identified and named in 1758 by Linnaeus when he was 50 years old. He called the Lady Papilio cardui, but since that time she has been reclassified into other genera. The genus Papilio today is populated by swallowtail butterflies, while the painted lady is in the brushfoot family: Nymphalidae. My copy of The Pictorial Encyclopedia of the Animal Kingdom (V.J. Stanek) identifies her as Pyrameis cardui; that genus being named by someone by the name of Hubner in 1819 and seemingly the home of the painted lady in the mid-twentieth century. I don't find any references today to this genus; maybe it has gone by the taxonomic wayside. Meanwhile, the painted lady has flitted between Vanessa and Cynthia, but seems to have come to rest at Vanessa, a genus named by Fabricius way back in 1807. Though Cindy is also a very nice name, I prefer Vanessa. It's believed he chose the name simply after a girl; the name itself means: beautiful.

Through the years the Lady has retained the same specific name: cardui. I think that refers to plants in the genus Carduus, thistles being one of the female Painted Lady's favored egg laying plants. Carduus crispus is a fine example of them. Interestingly, one symbol of Scotland is a thistle.

Anyway, this particular butterfly paid us a visit today, but it is NOT a painted lady. This is the very similar Vanessa annabella, the west coast lady. Among the noticeable but apparently not so obvious differences: the forewing tips are more squared off than rounded, the 5 eyespots are less prominent, and the bar of color nearest the tip of the forewing is orange (ish?) not white as in v. cardui. My bad! The west coast lady is more of a resident species, not staging migrations like the painted lady. It seems the two species compete for larval food resources, because multiple sources cite reduced populations of v. annabella in years of abundant v. cardui.

What's in a name, indeed! While annabella is another wonderful (if old-fashioned) name, she is not cardui; my apologies for the misidentification.
Posted by vanessa cardui at Saturday, June 23, 2007