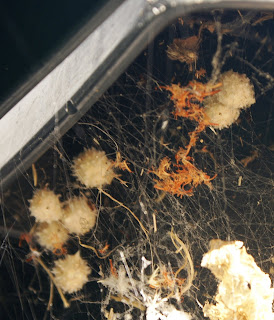 The 5-year old neighbor boy brings in the trash bins every Thursday after the trash guys empty them. Like a lot of kids his age, he's interested in big trucks and small bugs. Due to his short stature he has a different angle of view to his surroundings: he showed me some things under the rim of the green waste bin, and wanted to know what they were. There are a mess of them (seven in one cluster, two in another). They look like burs, are all tangled in sticky strong web, and a few had tiny holes in them. Well, I said, they sure look like spider egg sacs. But, which kind of spider?

A brief search for "spiky spider egg sac" revealed that this type of sac is diagnostic for the brown widow spider, Latrodectus geometricus, a spider of medical importance closely related to the also reclusive, also venomous Black Widow. Yikes. So of course after finding that out, I had a look for the mother spider and sure enough she was there right under the rim of the trash bin about three inches from where one (such as a certain 5-year old boy) would put one's hand to move the bin. I didn't think prodding the spider out of her lair was necessarily 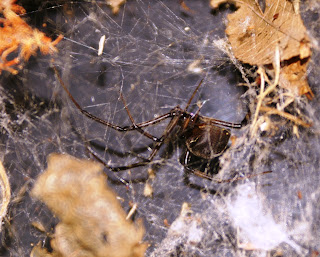 in my best interest, so I settled for this kind of natural, obscured, out of focus shot; here is a better look. There is some color variability in these spiders and it looks like the one on my trash bin is on the darker side of brown. Anyway, we removed the spider from the bin in the interest of safety, and repeated to the neighbor boy that any spiders can be dangerous and to never touch or annoy them. Another neighbor was chatting out in the street remarked he has lots of those in his yard; so, we mentioned again that the Brown Widow bite is painful and will require medical attention.

Many of the egg sacs had exit holes, which are made by the young spiders when they are ready to go out into the world. 9 egg sacs x oh, say 100 or so eggs each = one heck of a lot of brown widow spiders. Apparently this is typical production for a mother brown widow, so you have to wonder: Where have they all creeped off to?
Posted by vanessa cardui at Tuesday, July 24, 2007

spiders eat each other and get eaten by other spiders. Jim PS Thanx for the endurance of your blog. I have love it for a long time.

It's rather easy to identify if a particular web has been made by a Latrodectus: If you touch the silk, it will feel stronger than any other spider web, and the threads will make a clear sound when you break them.

Besides, they have a very particular shape.

I have dozens of Latrodectus mactans living and hunting in my yard (in central Mexico). I do not kill them, if I found one, I simply put her in a jar, and later I release her far away from my house.

I think we do not have the right to kill them, after all, they have been here long before the humans lost their fur and tails!!

Great blog, I really love it.

a coincidence- here in santa clara county, ca., about the same time as you did, i also discovered a mature black widow in her web in the finger hold of a large plastic box in the shed, very luckily before i touched it. i agree with ricardus - i let her go, way off elsewhere.

your blog is #1 on my list for lots of reasons. thank you. cynthia

thanks for helping us identify the spiky egg sacs that i've found all over my backyard fence!!!! (fountain valley, ca)

There are so many black widows and brown widows in our yard that removing them to a new home seems out of the question. I am wondering how much success others are having in ridding their gardens of them. Of course, I treat them with respect and care so as not to get bitten. By the way, I first found this blog when I was trying to identify the brown widows I had found, and it was very helpful.

We have so many black and brown widows in our yard that I have long given up on trying to get rid of them by any means. I am careful where I put my fingers--though not always-- and in over 15 years have never been bitten.

A black widow has gotten on me once or twice, and the first time it was on my neck so I couldn't see it, and I brushed it off without getting bitten. I think that, while the bite is definitely something no one would want to experience, getting bitten is not as likely as one might think.

BTW, I was a life-long arachnophobe until just a few years ago. I think I've "come a long way, baby!"

My mother was bitten by a black widow when I was a small child. She was in excruciating pain for a long time. Luckily, she was able to be given an antivenom. She was bitten while seated on a bench. She had been sitting there for over 45 minutes when it decided to get her. I'm always scared to sit on a bench or swing without looking under it very thoroughly. I've had one almost get me once. It was the biggest one I've seen. We found her upside down in her web, perched above a huge number of dead bugs. She was pretty scary and looked like black patent leather, she was so shiny.
I found this blog because we've been finding these brown widows and the spiky egg sacs in the last few weeks... Frontyard, backyard, at the front door, and just now at the back door. I feel like I have spiders all over me!