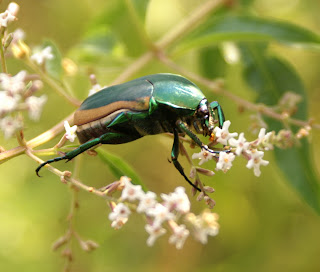 The first time I remember thinking much about green fig beetles was while watching several of them flying recklessly into things in their path like windows or the basketball backstop, crash landing on the driveway, and falling drunkenly off of fruit they were eating. Months later I would find their fattening white and bluish grubs living large in my compost heap or among the rotting pumpkins I had buried in the garden. Things seemed so easy for these beetles: clumsy and inefficient as they were, they managed to produce a healthy crop of themselves each year.

I don't have any fruit trees, and I stopped making compost, so the neighborhood Cotinis mutabilis don't visit as much anymore. The occasional one, like this one, tumbles in from over the fence to feed on lemon verbena flowers. At least, that's what I think it's doing: it crashes into a branch that is too thin to support its weight then tumbles onto the branch below, kind of accidentally staggering and tripping into a flower cluster. It makes motions that kind of look like eating, then loses its balance again, falls off the branch, seeming to remember it can fly only after a few moments of thrashing around. It might fly to another flower cluster or just putter off, bumping into the top of the fence on its way to another easy meal.
Posted by vanessa cardui at Sunday, August 26, 2007