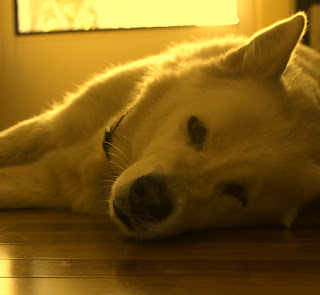 The dog says it's hot. We agree, and add that it is darned humid. The flies have decided this is it, this is their moment. Autumn is coming, they must breed. And while they are at it, annoy.

So we left the sweltering house and yard to the flies for the moment, and went on a quest for fly abatement products. I found it hard to believe all four nice, cool air-conditioned stores we tried were out of the tried and true fly-swatters, but there ya go. At OSH, the last place we looked, there was an assortment of other products to choose from that supposedly lure flies to a sticky, icky or otherwise unnatural death. We decided to skip the electric zapper and the ultra-sonic flying saucer-ish thing for the moment, but did pick up some other items I was almost certain would not work.

This first one is a doozy. The day-glo 3-D portals are designed to be irresistible to flies. According to t he manufacturer, this product "attracts and traps flying insects, including flies. Special patent pending Silvalure System™ of 3D designs and colors increases the chances of trapping flies." NOT; those flies you see on it are fake, shills meant either to trick the real thing into landing on the sticky surface or to trick the purchaser into thinking the damned thing works. The Indoor Fly Trap has not caught anything at all, not even a moth or a gnat. It does look really cool in the photo, though.

We also tried a long, white sticky tape that was supposed to be ultra convenient because when the tape (white is super-attractive to flies!!) gets full of flies you just cut it off and unreel another length of fly-catching surface. Instead, the tape unreeled itself in the very slight breeze, got stuck to my husband's patio computer monitor, annoying him immensely. It got sticky stuff all over my hands when I bunched it up and threw it away. This happened before I took a photo.

Then there are the traditional fly ribbons, which "hav 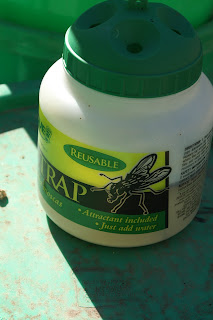 e always been effective at catching flies. If you keep saying that over and over and over, it will be so. NOT; so far exactly 2 houseflies have been captured by the four fly ribbons festooned about the yard and patio, as well as several glassywinged sharpshooters, a cobweb spider and random other innocent flyers-by.

We tried a fly trap, where you mix up a nasty looking concoction designed to attract flies inside a plastic jar with four holes in the 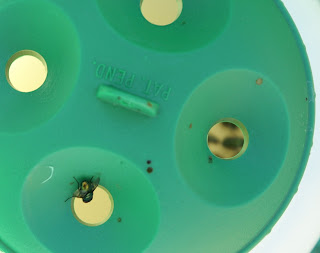 screw-on lid. Unlike the others, this does seem to draw the flies in and about two dozen of them have met their doom inside the jar. 24 flies, estimated 1/2 of which are female times 150 eggs per clutch = reduction of future fly population by 1800. Yay.

There are plenty of other products on the Victor website we haven't tried yet. Since it's too hot to do much else, why not obsess about flies? Of course the very best anti-fly product is prevention; do not allow them to breed. We oopsed by forgetting to put out two green waste cans full of grass clippings for the trash guys. A few days went by without picking up after the dog. Who knows what the neighbors have neglected to do? Anyway, the weather will soon cool off (won't it?) and the flies will abate as the temperature drops.
Posted by vanessa cardui at Sunday, September 02, 2007

I haven't used the long sticky tape for many years, since I caught a little bird on one.

We seem to have quite a population boom of sharpshooters here this year. How about you?

Yep I see a few of them on all sorts of plants, but they don't seem to be doing any real harm. I was at my sister's in Fullerton for a power-out Labor Day bar-b-que and noticed the rain of honeydew falling out of her chinese elm tree. If only it had been real rain.

Thanks for the tip about those tapes; we'll take them down since they don't actually catch flies. That must have been really sad with the bird.