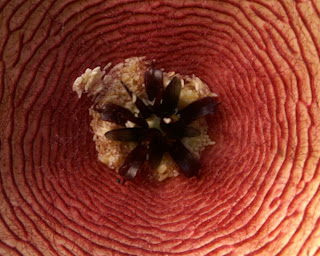 The battle against the flies continues, the long-anticipated bloom of the carrion plant or starfish flower as it is sometimes called (Stapelia sp.) has begun and as we hoped and even dared to expect, flies are being tricked by the odoriferous flowers. Their scent (or shall I say stench?) while not overpowering or nausea-inducing is definitely unpleasant: musky, slightly sweet, bacteria-laced like a semi-fresh rotting carcass or way-past-expiration-date beef with a touch of essence of maggot. In fact the flowers' odor is very similar to the Rescue brand fly bait used in the traps I recently bought to help bring down the flying pest population. Rescue deflects inquiries into the composition of their bait but suggests that lots of science was involved in its development. Without question, the smell of two-week old Rescue bait full of dead flies when you dump it is far, far worse than the stapelia. 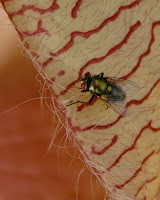 apelia odor is an effective lure for gravid female flies. They lay their eggs on the flowers tightly packed around the corona and reproductive parts, even before the monstrous buds have fully opened. I think the appearance and/or smell of the fly eggs attracts even more flies since as time goes by an increasing number of flies are visiting or just hanging around near the flowers. Of the visitors, the most prevalent species is the ubiquitous but al 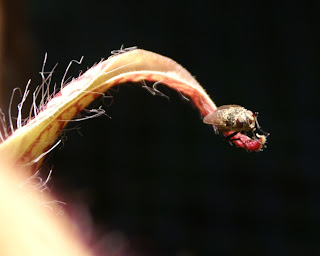 ways unwelcome green bottle fly. There have also been a few flesh flies, and several other unidentified species.

As I watched the flies swarm around the plant at midday it was tempting to consider spraying them with insecticide. But I haven't found a product that actually kills flies satisfyingly on contact and I'd rather not use broad-spectrum insecticides in the garden. So instead I set up another Rescue fly trap nearby, and it will be interesting to see how the bait derived from science measures up head to head with the flower scent derived from eons of coevolution.

Little more than a day after the eggs are laid the maggots hatch but there is nothing for them to feed on. Many of them dry up inside the flowers. A few seem to live longer (maybe they have eaten their dead siblings?) and squirm their ways out to the tips of the stapelia hairs and drop off the flower altogether. I was way a 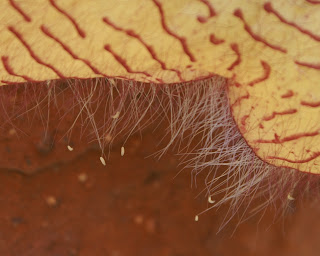 head of them and had placed a clean plastic tray underneath to catch and contain them as they dropped. There, having no shelter, no moisture, and no food, they have dried up like the others instead of possibly finding some rotten something to eat in the ground and growing successfully into more flies.

If not for the stapelia, those hundreds of fly eggs would have been laid on a suitable substance, hatched and grown into more flies. Stapelia is readily grown from cuttings you may get from a friend, neighbor, colleague or (as in my case) a dear nephew, and so could be an inexpensive and non-toxic tool to help cut down on the reproductive success of pest flies. Consideration needs to be given to the dropping maggot problem, though, for aesthetic if not practical reasons. Not everyone (or hardly anyone) is as tolerant as my family when it comes to insect experiments and observations that involve maggots. Maybe there is a substance that could be sprayed into the flowers to kill or even glue in place the maggots as they hatch so that one need never deal with dead, dying or any sort of maggots at all. 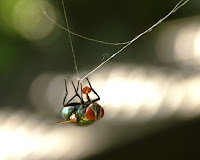 one funnel web spider has set up shop in the stapelia to cash in on the fly bonanza. An unlucky fly got caught on a strand of very strong web belonging to another unseen spider of a different species. When disturbed by me poking around the flower it was on it flew off trying to break free of its tether, only to collapse in suspended exhaustion with its labium extended presenting a grotesque but fascinating image.

And a note on the flesh flies: From what I have read, flesh fly eggs hatch inside the oviduct of the female fly, then the maggots are larviposited onto t 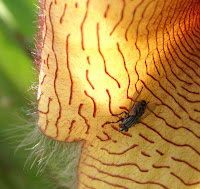 he host or substrate. I suppose I am disappointed I haven't seen that process yet.

It's easy to hate flies, but they are tenacious and interesting creatures. Maybe I could get a job at Rescue doing Science Stuff. For the time being, the last warm days are fast approaching, the flies sense it and will continue to be relentless in their quest to reproduce. We have tools at our disposal: stinky traps, stinky flowers, hungry spiders, sanitation and finally a fly 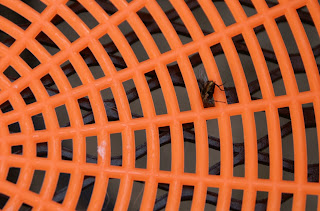 swatter. Yes, I am happy to report my mom found some late season offerings at the 99 Cent Store; first quality day-glo orange made in China, 2 for 99.
Posted by vanessa cardui at Saturday, September 29, 2007