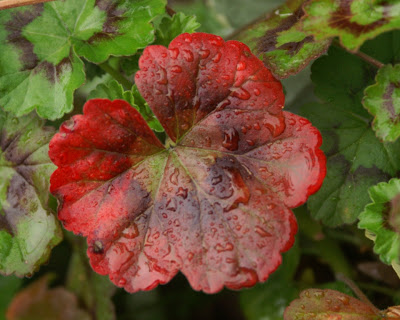 It's raining here again/still. Big deal you may say, but for gardeners in southern California it's pretty exciting. My yard work began today in a sunny but sodden garden and continued into a wet grey afternoon of picking up after the work of pruning, tipping, planting, dead heading, but before the fertilizing and dreaded oxalis weeding I didn't get around to. Anyway, one of the things I noticed was this bright red pelargonium leaf standing out among the other leaves on the same plant which are green with a maroon zonal band. Actually, this plant was variegated white and green when it was acquired but has reverted to its, I suppose, original rootstock form. It does still flower in salmon, a difficult hue to harmonize, and the reason this plant was sentenced to isolation behind the basketball hoop where it can do no harm to one's colorist sensibilities. I thought this red leaf rather pretty, especially all gilded with rain drops.

I also noticed a moth pupa hanging from one of the normal green/maroon pelargonium leaves; it like me was soggy with rain water. As much as one might like to conclude this pupa is that of the famed h 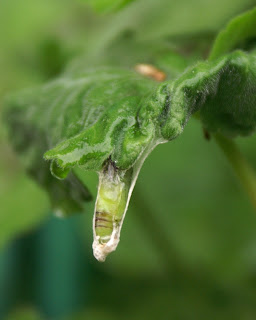 elicoverpa species (probably geranium budworm, as seen in the linked photo) which favors this pelargonium, one would be in error. Helicoverpa pupate underground, forming a shiny brown pupal case inside a hollowed out chamber in the soil beneath its former home. This pupa is somebody else, yet to be determined.
Posted by vanessa cardui at Saturday, February 23, 2008