Who's Chokin' on Bloom Day 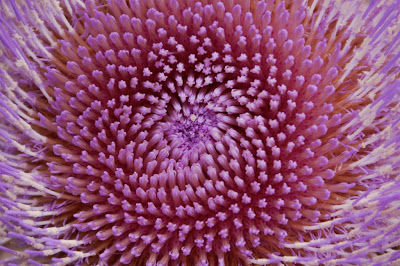 Being on the west coast is tough when it comes to east coast deadlines and such. Anyway, 5 minutes to game time, we're still trying to decide between Z Pizza and something else for dinner, and I'm getting around to this bloom day post. 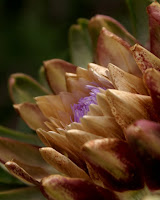 I've been watching and photographing this artichoke bloom for the past week or so, knowing I wanted to use this for my June Bloom. This is the top flower on my artichoke plant, the first to form and the first to open. I am a poor c

andidate as a farmer by the way, because I find it so interesting to watch plants grow and mature, I fail to harvest the edibles at the proper stage. Anyway, when the flower started to open, the bracts (which would have been the edible green parts, also known as imbricate phyllaries I think, which subtend the flower head and collectively make up the involcre, all in the fascinating parlance of botany) spread apart as the heart (the receptacle) grows wider and wider to hold the large number of disk fl


Each of the purple tubes is an individual flower, and it was interesting to see how the outer ring of them stood upright while those making up the inner circle at first weren't there, then seemed to lay down or were shorter (or both), as seen in the top photo, forming a complex spiral pattern. As days went by, mo 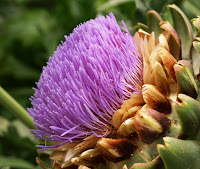 re of the inner flowers also became upright until they formed a fully brushed out thistly flower today.


I'm not sure if the white substance seen among th e flowers is pollen. It feels slippery to the touch. The smell of the artichoke flower is strong and sweet. I have it on good authority that bees have visited the flower, but in all of my observation time I've only seen one honeybee and no other insects on what seems to be a motherload of potential food, although there was some frass on the outer area of the receptacle, as if something was feeding inside. As the flower matures and beyond, I will continue observing to see what can be seen using the artichoke I let get away for food. 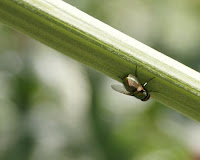 A fly (female green bottle, Lucilia sericata) showed up as I waited for a bee today, seen here resting on the stem of one of these soon-to 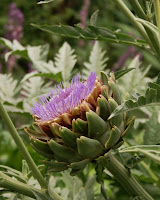 Not too shabby as it is with the one blossom and loads of buds, my artichoke plant will be quite a spectacle when in full bloom; even the leaves are beautiful lit up by the mid-June sunshine.

That's funny, I do the opposite and harvest too early! You'd think those flowers would be a butterfly paradise... or at least a playground for skippers. Congrats on your team winning!

And, the sausage mushroom pizza was great, too.

Fascinating pictures. I need to plant veggies just for the blooms - lol.

Great idea- plant the patch with vegetable for flowers, not food. The possum union may object- but their is some acceptance of circumstance that could be palatable than half- eaten bounty they leave for me...