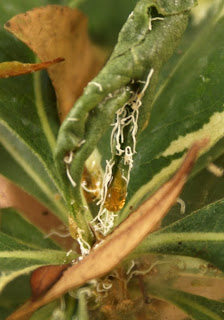 I was cruising around looking for something cute or picturesque or meaningful to photograph for summer solstice, and instead found the variegated pittosporum covered with sticky white squiggles.

The new growth is all folded together on itself, and the cavity on most of these areas is filled with very sticky honeydew, as seen dripping in the photo. The white squiggles can be followed to their ends at the hind end of the psyllids which are tiny, green, and squared-off in shape. 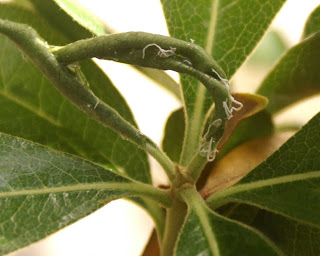 id is called "Pittosporum psyllid" for want of a better name for now. It was first noticed in OC about 10 years ago but didn't really escape into the general public. Lately, though, it is being seen on hedges in ordinary neighborhoods like mine. Its only known host is pittosporum; it came from Asia; and it seems capable of making a terrible mess of my pitts. These psyllids, like the eucalyptus psyllids, exude a waxy substance which, in the case of the others is used to create a shelter to hide under. What the purpose of the white squiggles of Pittosporum psyllid is, I don't know yet.
Posted by vanessa cardui at Tuesday, June 22, 2010

Nice photos!
I have included a link to your page from my email newsletter I send out.