Buckwheat and the Flies it Attracts 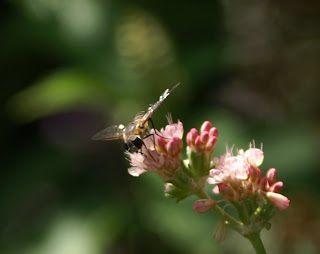 The red buckwheat, Eriogonum grande rubescens, continues to bloom and turns out to be quite an attractant for insects, with a cloud of them hovering around the small pinkish blossoms on sunny afternoons. We are all familiar with buckwheat honey so it's no surprise that buckwheat is a good nectar source. Buckwheat honey, as found at the supermarket, is made from the nectar of the crop plant Fagopyrum esculentum, common buckwheat. Wild buckwheat (eriogonum species) is common in our chaparral areas so local honey labeled wildflower or chaparral is likely to include buckwheat as one of its sources. There are about 250 species of eriogonum found in North America; there are only three found in my yard, so far.

The most abundant insect order found feeding on the buckwheat lately is diptera: 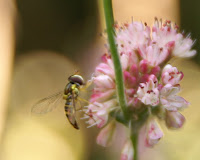 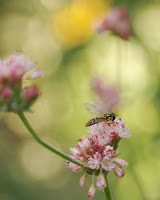 the flies. Among the many species visiting, I've been quick enough to photograph these few:
A pretty syrphid fly called Allograpta obliqua, common oblique syrphid, always perches high on the flowers with the wings outstretched perpendicular to the body. The larvae of this syrphid feed on aphids. I often see adult females laying eggs on the tips of gaura where aphids either are or will be soon.

Green bottle fly, Lucilia sericata, feeds on nectar as well as mammalian dung and worse in an incredible display of gust 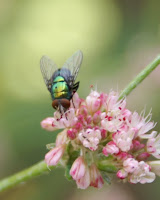 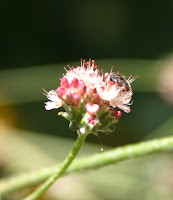 fy as a member of genus Paragus, based on photos at Natural History of OC that bear a striking similarity to Red-butt. This little guy hovers near a flower, then suddenly goes to the blossom almost in a magnetic-attraction movement. While feeding the wings are straight over the back, the abdomen is curled and the fly itself is deep within the petals. 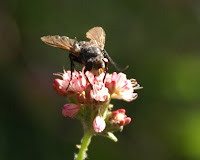 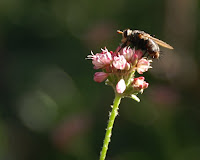 The adults feed on nectar and pollen, while the larvae parasitize caterpillars.

Another syrphid, the one with thickened hind femurs, is Syritta pipiens. The larvae of these flies grow up in mucky manure or o 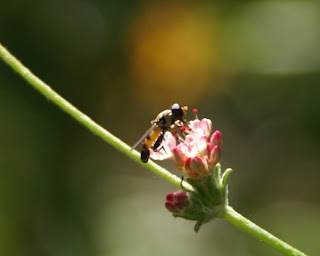 
This last picture is not a fly but a bee. One way to tell is by the antennae, much too long for a hover fly or any other brachycera (fly with short antennae); also the shape of the eyes. Bees have four wings, while flies have two. 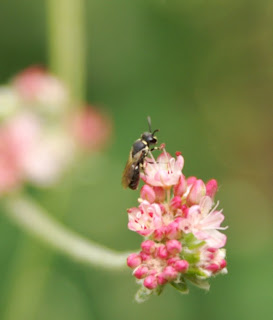 I'm so glad you've id'd all these little ones. My cloud of grande rubescens has hosted the same sort of crowd, although your flowers are a lovely heavenly pink, while mine tend to be much darker. The honeybees can't get enough of this stuff and a tornado of bees emerges from the flowers every time I walk by.

Some of the other (not pictured) red buckwheat has very pale pink almost white flowers.