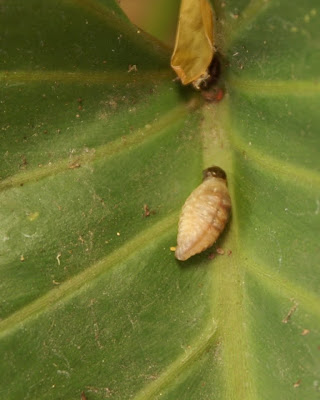 It was the 2nd hot afternoon this summer and so we were sitting on the patio appreciating the quality of shade produced by the calico sheets I had just hung up when a wasp flew by in an unusually weighted down way. I noticed she was carrying something and seemed to be having a hard time of it, when she landed on a plant nearby and set down her load. She flew off, leaving this larva behind on the philodendron xanadu leaf. 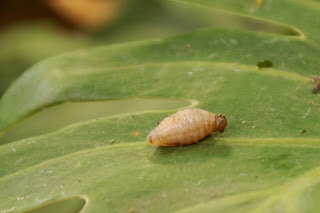 The flying wasp looked like a polistes but I didn't get a good enough look to say which species. This larva is a wasp. Sometimes they fall out of their nest cells; maybe the adult wasp was trying to pick up one of her young and return it to safety. Or could she have been preying upon the unfortunate fallen larva of another species? She never returned and the larva is now dead. It's interesting to be able to have a look at what otherwise remains mostly hidden inside the wasp nest. 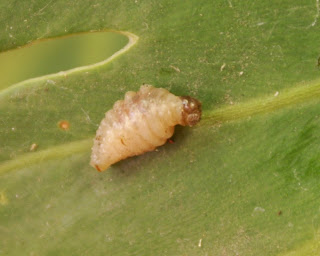 Do you think it's a similar behavior to the one in honey bees who drag their deceases comrades out of the hive? Housecleaning?

I'm in Huntington Beach and I've seen two little guys that look just like this larvae in the past month. They turn up in the middle of my patio but there's no nest in sight. We do have a lot of visiting wasps. Maybe one was relocating and dropped its larvae? I'm glad to know what type of larvae it is. I had a hunch it was wasp and did an image search. Your photo looks just like what I currently have wriggling around on my patio! I've also been noticing a lot of bees on the patio who are near death and seeming to be having a seizure. I wonder if these two things are related?

April: not sure how you'd get orphaned larvae without a nest nearby. They won't wriggle too long out in the open without being fed, though.
As for the bees, sometimes there is an area where dead/dying bees congregate (maybe due to wind currents). Your description of seizure-like behavior, though, suggests someone using insecticide on a hive nearby maybe.

Wow, was this post helpful. I found one, and then a few minutes later, another of these little lumps on a porch table. I couldn't figure out how they got there. Though we've been battling wasps for weeks, there was no nest overhead. Interesting to know that they can carry them. Found this post through an image search, so thanks also for the great photo!

Larry and Daphne: Glad to be of service, and thanks to google for awesome image search capabilities. Happy bug hunting!

I saw a wasp carrying one of these yesterday which prompted me to find this site. I'd like to be able to identify this grub because when the wasp left it there, I ate it. Much to my surprise, it tasted very much like watermelon. Sweet and fruity. Now I'm on the search for more of these delicious little critters.