The Highs and Lows of Boatman Flies 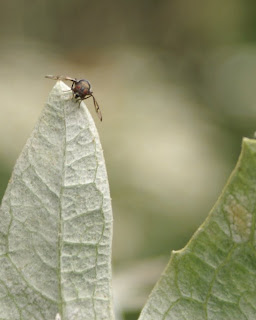 Here is a boatman fly, pogonortalis doclea, plying the waters between the spikes of artichoke leaves in the backyard. I thought this looked cool, like the fly was on a mountain peak with a hazy high altitude sky in the background. I often see these flies in this kind of setting, on a leaf usually solo, beating the wings in an oar-like fashion. Sometimes I see two of them mating on a leaf but not as mu 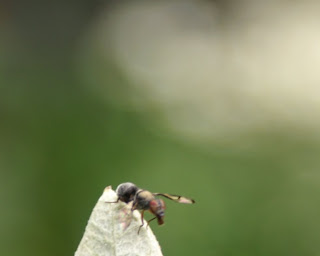 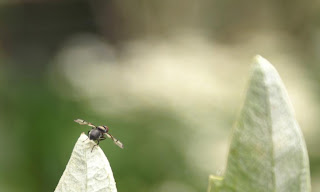 Looking around the internets, I find the wing-beating is said to be a male display. Either to attract a female or discourage a competing male, I suppose although the internets did not 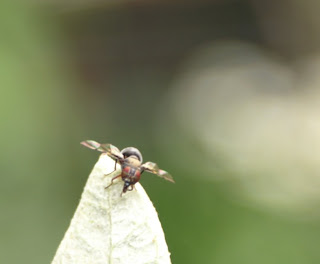 clarify. Males are also said to engage in head to head combat, again presumably to defend a territory with potential females to mate with. I wonder what else do these flies do with their time; what do they eat, where do they lay their eggs, how do they pupate? Many online sources state that "adults are attracted to mammalian dung to feed". I was tempted to repeat that obvious-seeming morsel of information here, when I realized I was reading the same thing verbatim in various sources, as if in an echo chamber of unverified although plausible data.

So I had a look. Thanks to Gizmo the won 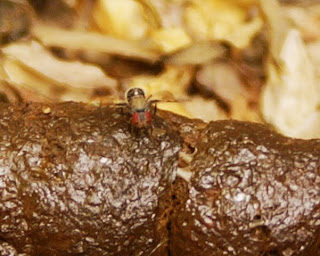 der dog, there was some fresh mammalian dung in the backyard. And sure enough there were several boatman flies on said dung. Two appeared to be males, waving their wings and briefly engaging in what could have been described as head to head combat. Then one of those fle 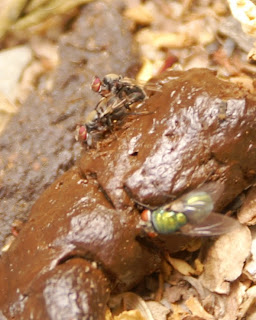 w off. Two others were engaged in coition right there on top of the substrate. They remained in the mounted position for some 15 minutes (or more: they were already coupled when I first showed up on the scene). Eventually the male flew off, then the female sniffed around the dung and the ground under the dung. I did not see her lay eggs, although I suspect the ground beneath the dung could be the site of egg laying.

On the dung are marks that appear to be pits from feeding activity. I did not actually see these flies feeding, however, as they were otherwise occupied at the time. Plenty of flies are attracted to dung, including this green bottle fly 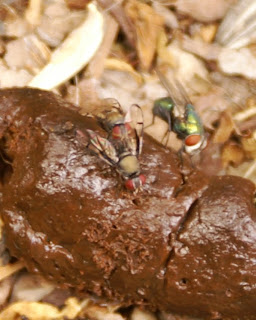 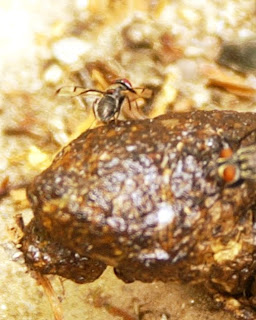 (lucilia sericata) that seems to have a prurient interest in the goings on on the dung. A flesh fly also popped in for a look, and scared off the second solo male boatman fly.

It seems easy to assume that boatman flies not only are attracted to mammalian dung to feed but actually do feed on it but is it safe to say that? I do know they hang out on dung, mate on dung, scrounge around on dung and wave their wings on dung, as well as doing all those things on nice, clean artichoke leaves.

Last, can I mention how unpleasant dog poop is to look at in photographs, as it seems to readily trigger an involuntary disgust response even though the photo poses no actual unpleasantness to the viewer?
Posted by vanessa cardui at Sunday, July 11, 2010

Nevermind how unpleasant it is to look at the pictures. (not too) I was wondering if you really sat there for a full 15 minutes, taking in the ambience of that stogie in the heat of the day!

I have 2 large dogs, and have seen my share of "poop flies", but I get mostly the green bottles, a few flesh flies and these other little orange flies that I always thought were some kind of fruit fly. I may have to take another look.

Yeah, that's going the extra mile for sure. So glad Gizmo was willing to contribute for the sake of science!

Cindy, you definitely must take at least another look. In fact, maybe we should form a dog poop observation club for the sake of solid science to replace rampant assumptions about fly behaviors!

I did some other stuff during the 15 minutes, but kept my eye on the flies, not wanting to miss anything. It's surprising how long that can seem.

Mammalian dung, indeed. Suki, being a large dog, used to attract lots of dipteran attention in her pooping grounds out back but I never noticed the boatman flies on her substrate. Gizmo, the visiting drop kick dog, uses a different area of the yard for his toilet and I noticed them on the first look. Also Gizmo is fed Beneful Beef Stew prepared meals, while Suki was strictly Science Diet dry food. A factor in attracting Pogonortalis doclea?