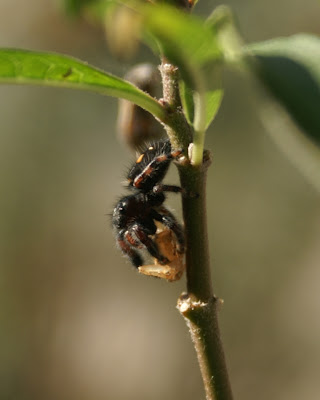 I was watering the shrubbery this morning as the sun began climbing to what was predicted to be an apex of unexpectedly ridiculous blistering heat, when a big black spider climbing around in the milkweed caught my eye.  It was a Bold Jumping Spider (I love that name--if you've got it, flaunt it), Phidippus audax with another spider caught firmly in its chelicerae, aka fangs. 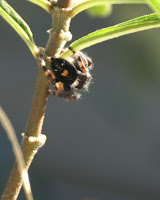 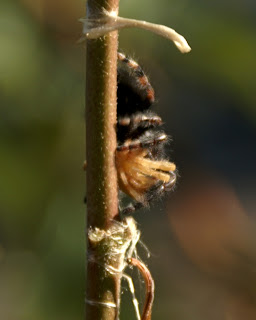 The unfortunate prey looks to be either a funnel web spider or maybe a young araneus orb weaver.  Hard to tell with its body all bunched up.  We know it is brown, it appears to be moderately hairy.

And it is a spider that wraps its prey in silk.  Here is a honeybee that was, I presume, the prey of the spider that became prey.  It is hanging among the remains of a web among the milkweed leaves not very far at all from the spider drama. 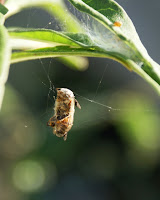 Interestingly, the honeybee prey has attracted several milichid flies, sometimes referred to as freeloader flies.  These small predators take advantage of the time while a spider waits for its wrapped prey to predigest, and feed on this easily available nutrient source usually as the spider looks on.  In this case, the flies have the bee all to themselves.  This mode of feeding is known as kleptoparasitism, stealing food or prey from another organism that has captured or even prepared it for itself.  The parasite is the milichids, the parasitized is the spider. 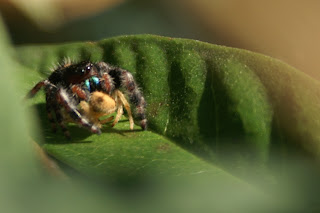 As I watched the bold jumper sauntered down the milkweed stalk, then paused to focus my camera with its acute eyesight centered in the Anterior median eyes (the two big ones in the middle of the spider's face).  Then, spider and spider prey disappeared into the shade of the shrubbery.
Posted by vanessa cardui at Monday, September 27, 2010