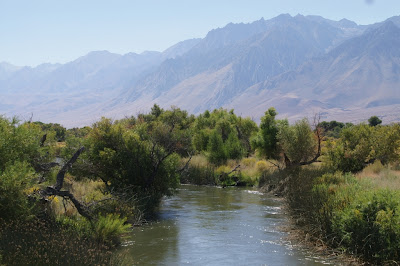 Today I am in the Owens Valley avoiding the extreme heat at home by enjoying the normal heat found here in what some people consider the desert.  We went off highway to check out two access points to the rewatered Lower Owens River.  Some locals were found enjoying the afternoon sunshine. 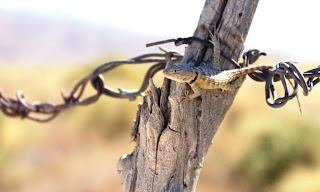 On a fence along Aberdeen Sta road near the bridge, this lizard looks smug, and so it should when you consider the lush insect producing environment found at the foot of its fencepost.  A bee nearby visits flowers on a rabbitbrush, Chrysothamnus nauseosus I think.  These shrubs are abundant, still green and in bloom throughout the valley in late September.  Is this because of the water flowing in the river, peculiarities of the weather this year, or do I just not remember them being so lush in past years? 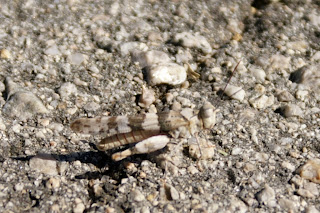 We rejoined the highway, then got off again near Manzanar and stopped to check out the old airstrip not far from 395.  Its asphalt surface is still there, checkered with cracks and pigweed.  There I found this grasshopper, but just barely, due to its excellent camouflage.  Then we continued up Manzanar Reward road to a peculiar put in spot on the river crowded with barbed wire.  People were fishing there where the river passes under a bridge in dual 3' metal pipes and goes on its way toward Lone Pine. 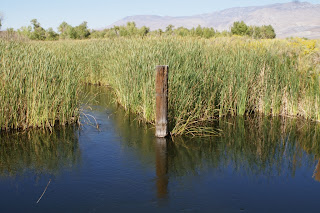 Looks so nice. Where do you stay out there, or is it just a day trip?

It's fun to spend a couple days when we can. We've camped, stayed in funky motels, bigger motels, historic hotels, and cabins and resorts both up in the Sierra and in the valley. It's a great place to visit if you like to see stuff like geology, history, scenery, interesting people, weird desert stuff, etc etc. On this trip we stayed up in June Lake where it was cooler, which is only an hour from the valley floor.

Have only been over that way once, but dream about going again. Those photos are luscious, especially Mr. Lizard!