Later After the Rain

So then it stopped raining and the sun came out.  It was pleasantly warm and fresh; the birds were chirping and I went out looking for, oh I don't know, rainbows?  butterflies?  smiley faces? 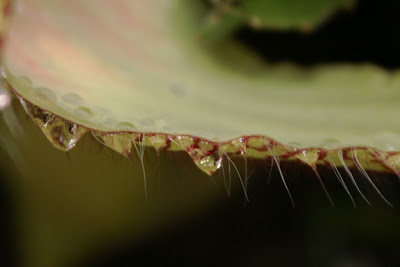 The stapelia flower had opened, and some drops were caught in the hairiness along the petal's edge.  These flowers mimic flesh in appearance and odor to attract flies, which are their pollinators.  The flies lay eggs inside the flowers which hatch to no avail, the food-less maggots eventually dying, drying up and dropping off to the soil below.  Btw, I've not yet gotten a stapelia seed from all this pollination activity. 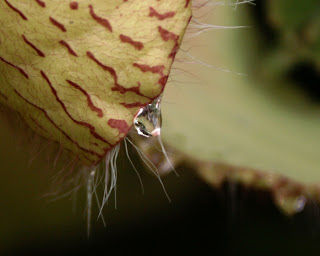 I was checking out the ripening seeds of the amaryllis belladonna, when a pair of hands on the soil below popped into my field of focus.  Gak,  I had almost stepped on a young possum that had quite recently died right there in the pathway. 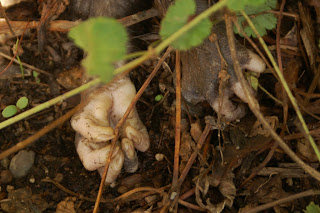 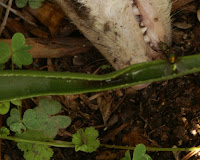 Flies were being attracted, including green bottles (Lucilia sericata) and boatman flies (Pogonortalis doclea) even though there was no discernible odor of decomposition yet (other than the nearby scent of stapelia).  I dug a hole and buried the poor thing, its tail letting go of a clump of coconut geranium as it slipped into the ground. 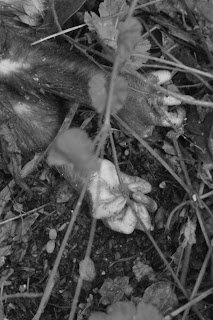 Ick, what an unexpected surprise! And just in time for Halloween. Sheesh, forget the fake tombstones, scare the kiddies with possum hands!

The little hands were so perfect, I felt sad. But, yeah. Opossums can be kind of scary even when they're alive.