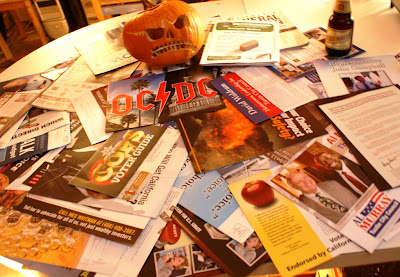 Halloween has passed and it's time to size up the haul.  It's enough to make a cranky pumpkin reach for a beer, but there's no time for drinking now, with the polls closing in just a few hours.

If you believe the talking heads (and keyboards) This Election is Interestingly Different.  I knew something was up when my post office box kept being filled with odd-sized glossy coverstock mailers.  Sometime in October I started saving this stuff out of curiosity, and thinking I would look it over as I sat down on election day for my traditional filling out of the sample ballot over lunch.  So, yeah, sadly some of the mailers got thrown away before they were counted and weighed in.

Nevertheless:  we ended up with 72 pieces altogether, at a total weight of just over 2.5 pounds.  That may not sound like too much, but remember we have the economy sized post office box.  Twenty of these pieces were concerning the gubernatorial race, at a total weight of 15 ounces.  This makes sense, since the governor is an important position and it is reasonable that these mailers would be 34% weightier than average.  We're a smallish town, Tustin, but we have 8 folks running for city council.  From them we received 16 mailers weighing 10 ounces, not counting the stuff we were handed at our local city fair in early October.  That's 12% above average but respectfully less than the material from the governor-hopefuls.  Everything else, from legalizing pot through candidates for school board and redistricting initiatives, made up the balance including those slate mailers from the firefighters, tax-savers, dog-lovers, etc etc.

I must say, some of the most useful information in these mailers are the endorsements.  If a city councilperson I can't abide endorses a candidate, well, that candidate can't be all good, can they?  Other tidbits I enjoyed were the smear attempts in our local races none of which could be verified by the sources the authors offered on their mailer.  Beth Krom, candidate for US Congress, gets the nod for most entertaining and varied mailers, including the one with the OC/DC graphic prominently featured in my photo.

This stuff, along with the obligatory campaign signs scattered along the road is colorful now, but soon will fade, dry up and blow away like so many autumn leaves.  That is, unless their owners come along tomorrow and pick them all up.

Fave election sign spotted on a cul de sac near my home; a call for humor and proper sequencing of holidays: 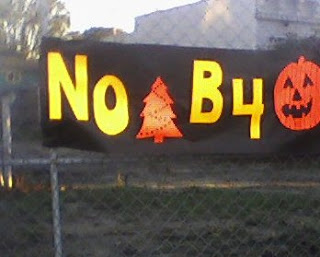 I guess too many millionaires running this year could afford all that glossy paper and postage. What a waste! However, I would gladly campaign for no "tree" B4 "pumpkin." Best sign ever!

Makes you wonder, doesn't it? And not that any of these materials are printed on recycled paper, either...

The election was something wasn't it. I heard that the Mc Mann lady of WWF fame spent 42 million of her own money on her campaign it tallied down to $90 a vote received for her and she lost.

We got maybe 6 mailers from one guy trying to keep his seat in the house, over the top.