How Oleander aphids and syrphids spent their November 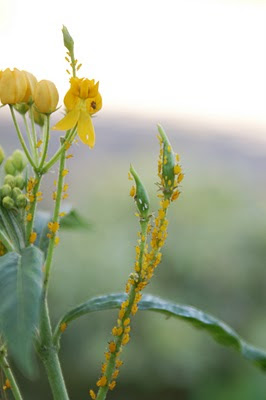 Toward the beginning of November these milkweeds were flushing with oleander aphids, Aphis nerii.  It's coincidental that these bright orange aphids are the same color as the flowers on this milkweed, since they also infest oleander which has white, pink or red flowers.  The aphids' bright coloration is a warning adaptation, since the aphids feed on plants toxic to many would-be predators. 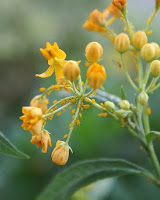 There are many sizes of aphids in this established colony ranging from tiny to adult, along with some white cast off sheds. 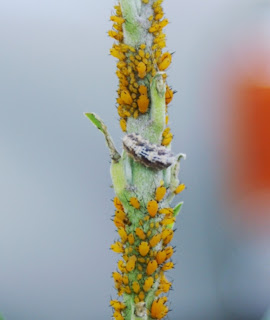 About two weeks later I noticed some syrphid larvae mowing their way through the crowd of juicy aphids.  This one has managed to clear a significant space around itself, apparently able to tolerate the taste of these toxi-fied tidbits.  There is some documentation that ladybird and lacewing larvae suffer development problems during pupation after feeding on aphis nerii; not sure about syrphids but I'll watch and see if this one emerges whole. 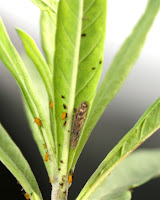 Another syrphid larva stretches out along a relatively aphid-free leaf.

The first of December the syrphid larva on the stem has pupated, the crowd of aphids still keeping its distance.  A few days later, though, some aphids have begun to encroach on the pupating and now non-threatening syrphid. 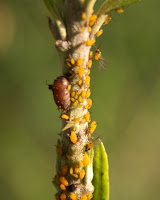 Meanwhile many of the aphids on the flower buds have become alate, ready to fly off in search of unsullied fresh territory and spread the good news about being Oleander Aphids. 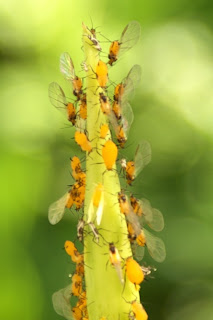 Ha! So aphids *do* have wings. Everyone keeps telling me to just spray them off, they can't get back on the plant, and I keep saying "But they do."