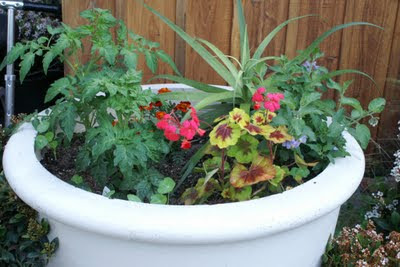 We planted some big pots up with tomatoes and peppers from the Fullerton Arboretum, along with companion plants (pelargoniums onions nasturtium mint oregano marigolds and each other) sure to help our crop become a success (!).  We used nice fresh bags of Kelloggs Patio Plus to fill these pots, watered everything in and sat back to watch things grow. 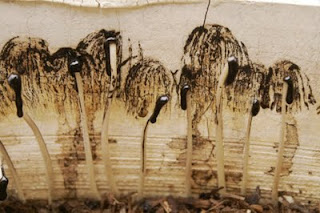 And grow they did.  One morning I noticed spore prints all along the side of one of the pots, from a bunch of small now slimy mushrooms that had gone previously unnoticed under the tomato foliage. 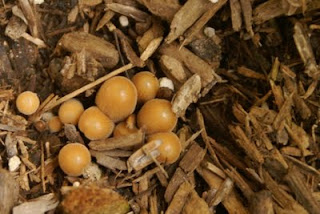 A few days later there were some fresh buttons rising from the potting soil, which grew and opened into these small (about 1 inch across) corrugated caps. 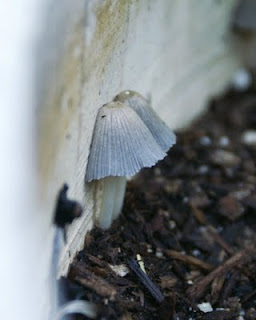 The open caps began collapsing and then dissolved into black goo within a day or so. 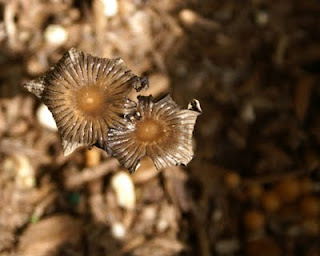 My knowledge of mushrooms being almost non-existent, I hesitate to say what type this one is.  However the gooey black stuff seems typical of the genus Coprinus, the aptly named Inky Cap mushrooms.

The fungi were liberally and fairly evenly distributed throughout the planted pot and they continue to pop up every couple of days.  They don't seem to be causing a problem for the tomatoes which now have fruit setting; or any of the other vascular plants.

Did the mushroom spores or mycelia come in with the potting soil? 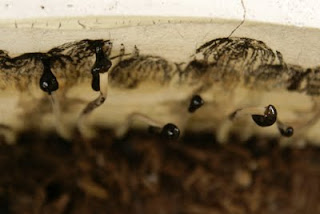 Ooh, those spore prints are really neat! Those little mushrooms made their own art!

We bought the same stuff and having the same problem with a seedling Giant Sequoia. Did you ever figure out how to stop these mushrooms from growing? And did everything turn out ok with your plants?

jessie: mushrooms continue to pop up now and again although fewer than initially. there's another species of 'shroom as well. most of the tomatoes and other plants are thriving although 1 tomato plant (golden grape, a late season cluster tomato) became sick: discolored stunted leaves and fruit that set but then turned brown and smooshy. we pulled it out when it was clear it was a lost cause.
of course tomatoes get a mind-boggling array of diseases: http://vegetablemdonline.ppath.cornell.edu/DiagnosticKeys/TomLeaf/TomLeafKey.html
we have for years liked the kelloggs patio plus product but lately (this spring) have been having lots of fungus issues with it.

May be that you are over-watering?

I have encountered the same problem with every pot in which I have used Kellogg's Patio Plus product. Water, though not necessarily overwatering, may be the issue because I am getting more spores right around the emitter. I hope the spores do not affect development of the onion seedlings I planted today.

We just discovered these this morning in Huntington Beach in a pot we had used, yes, Kellog's Patio Plus! Will keep an eye on it.