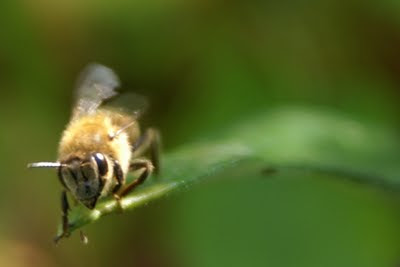 European honeybees, Apis mellifera, were brought to North America by the European colonizers over 390 years ago according to my lazy afternoon reading of a few days ago . . .  now they are as ubiquitous as cell phones throughout the U.S.  Well, up until recently when domesticated honeybee hive numbers and populations crashed.  Now when we see a distressed honeybee we might feel sad but we may feel uneasy not knowing if this bee is simply old, or has a damaged wing, or it might be a refugee from colony collapse disorder which poses a threat to our food production. 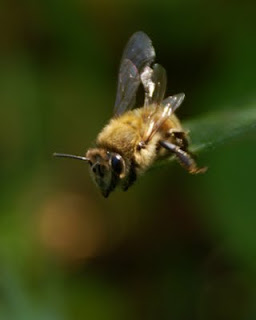 But yeah, honeybees are nice and they have endeared themselves to us not only by pollinating our crops and producing honey for us to eat.  The honeybee also seems to be an emblem of all that is good in the insect world.  Look at how many states in the US have officially adopted Apis mellifera as their state insect as opposed to selecting an insect native to the state. 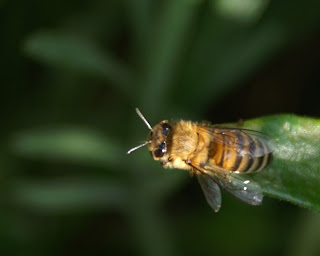 Also according to my reading, people have monitored the volume of nectar and pollen collected by honeybees and other pollinators and  have calculated the effects of the redistribution of floral resources; they also actually count the visits to flowers by various critters, then catalog the pollination success by way of mature fruits and seeds . . . reproductive success.  And the evidence suggests the presence of honeybees reduces the populations of other bees, and that honeybee competition reduces floral visits by more effective pollinators, thereby reducing reproduction among the native plants to at least some extent.

Given the huge diversity of flower forms and pollination strategies, it seems naive to assume one type of bee could service them all; yet the ubiquitous and noble Apis mellifera reigns in our collective consciousness as the default, all-purpose pollinator. 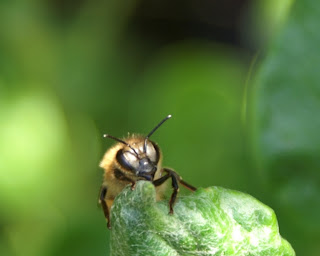 But our misinformation is not the honeybee's fault, especially not this cute little one with the damaged wing.  She hung out on a leaf and repeatedly groomed or combed the damaged wings as I was watching the male carpenter bee that hovered a few feet above her perch.  Later she flew or fell to a gazania stem; then later she was gone, either flown off or more likely fallen into the foliage below, no longer a colonizer or the new bee but a worn old bee that worked until her demise for the survival of her hive. 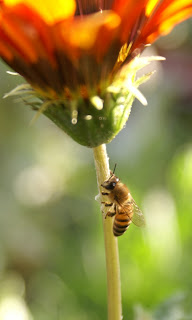 I read in Sue Hubbel's book (one of them) that the colonists brought bees over in their ships. The mind boggles. Tiny little ships. How did they do it?