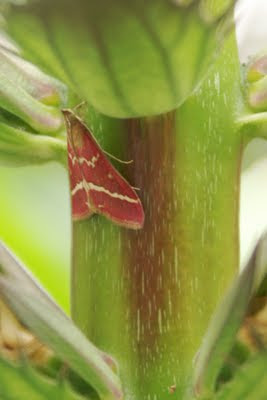 The bear's breeches (Acanthus molle) are in bloom.  It's an interesting perennial that goes dormant in late summer after blooming.  The big leaves start coming up from the rootstock in the cooler part of the year, then the spikes of flowers appear as it warms up, growing to five feet and more:  taller than me.  The unopened flower buds (? bracts? not sure what they're called) are pretty backlit by the morning sun. 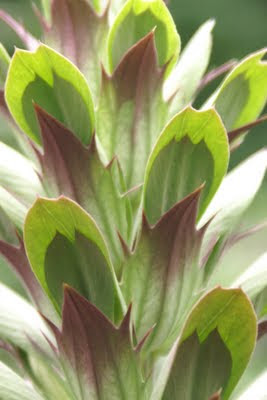 A few insects were visiting on this particular day.
In the top photo is Pyrausta volupialis, a pretty little moth that I know nothing much about.  The genus' name derives from pyr, for fire which references the red colors, and it is populated by other very pretty moths, many more colorful than this one. 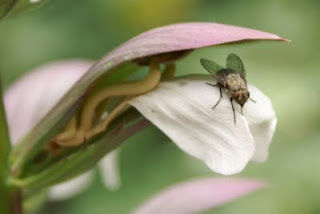 A fly was hanging out on the peculiar shaped flower parts.  This looks like a muscid fly of some sort. 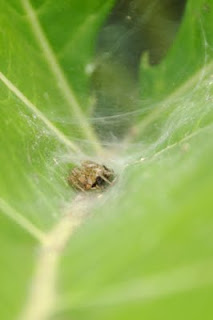 I happened to glance down as another fly was grabbed and hauled down the funnel web of a funnel web spider built in the shallow vee of an acanthus leaf.

Acanthus is supposedly pollinated by bees; I'm not sure I've ever seen a bee visiting these flowers, maybe a carpenter bee.  Anyway, it doesn't attract swarms of pollinators like some other plants, but does serve as a home or perch for a few random creatures. 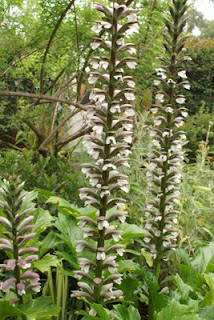 You have an informative blog. I’ve learned something from it. I do have mine too www.claire-fernandez.blogspot.com... thanks

mine are also blooming now but would quickly die back in our hot sun if i stopped watering them. however, i want to keep them looking beautiful for a garden party next weekend and then i will let them go.
cynthia