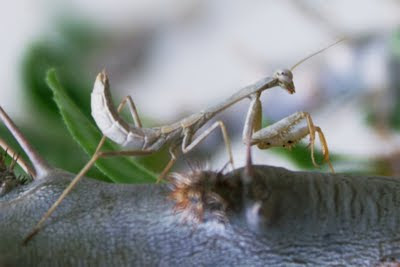 I noticed this mantis the other day as I was preparing to water the adenium plant it was lurking on.  At first I thought it was a molted mantis husk because it was so light in color.  I reached out to examine it and it moved on up the sparsely leafed and heavily thorned branch it was on. 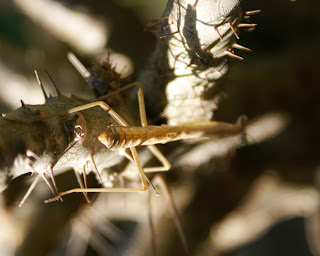 Later I found the actually shed exoskeleton dangling from another branch, much less lively but similar in color to the real mantis. 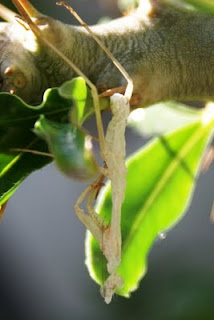 This looks like Stagmomantis californica, the species of mantis that has been stalking my garden, except the coloration is much lighter and the stripes on the legs are missing.  In this previous post is a mantis of the same age showing the coloration I typically see.  I know there is color variation in California mantis, and I also wonder if they have some ability to change color to match their environment.  This light one blends in so well with the shiny grey bark of the adenium branches. 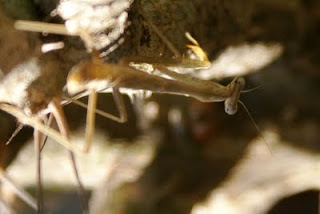 I also wonder how many insects it takes to grow a mantis.  Not only is this adenium sparse (not sure which species it is but it has much fewer and smaller leaves and flowers than the typical Desert Rose you see), but it is growing in a pot on the patio, making for what I imagine are slim pickings in the prey department.  Still, the little white mantis continues to stalk among the thorns, the first and only mantis I've seen in my garden this year. 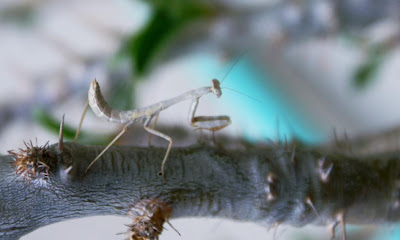 I haven't seen any mantids yet this year. Great photos!

great pictures!!
the mantis is such a unique and interesting looking little critter!!