The Rise of the Small Assassins 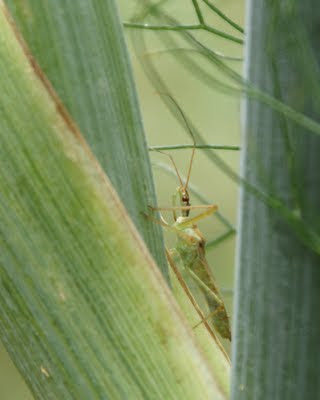 Another exciting part of the alarming increase in the presence of bugs in the garden is the sudden rise of the assassin bugs.

Zelus renardii was one of the first loves of this blog, going way back to 2005 with this post in which I ruminated about the difficulty of identifying buggies due to the vast varieties of them, some poorly studied or documented.  Since that time dedicated professional and amateur entomologists (and arachnologists and other -ists too) have built up wonderfully helpful resources online with new information including blogs, photo galleries and even online keys to help identity based on appearance, behaviors, times of emergence and geographic distribution of species.  Thank You.

And oh joy, Z. renardii now has a common name:  Leafhopper assassin bug.  Not sure what the basis of that name is, but I'll run with it. 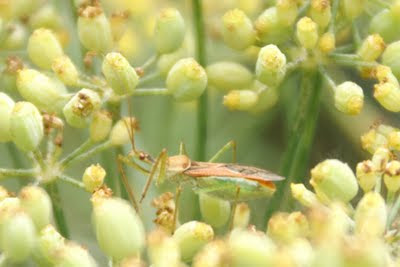 I found several adult leafhopper assassin bugs on the fennel, including this one which the distended abdomen . . . a gravid female from the looks of it.  Here is another view of her with a green stink bug looking on among the fennel flowers. 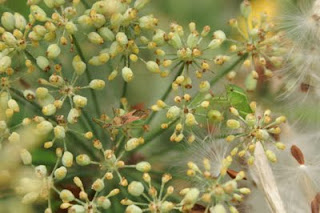 Assassin bugs lurk slowly among flowers where other buggies come to feed and Pow, grab them with their forelegs then pierce the prey's body with the long proboscis and suck out the juices. 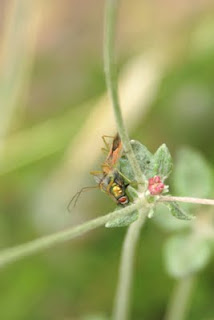 This assassin has captured a green bottle fly (Lucilia sericata) near a bud of the red buckwheat.  I just read a reference (see under Remarks) that suggests this species and other Zelus actually secrete sticky fluid and present it on setae (hairs) on the forelegs as an attractant to prey similar to a sundew plant.  Wow. 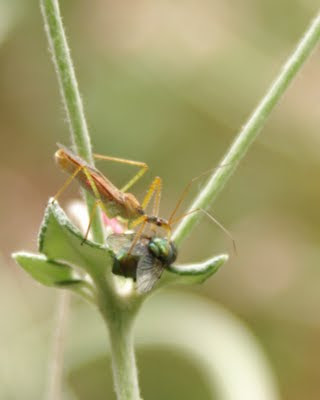