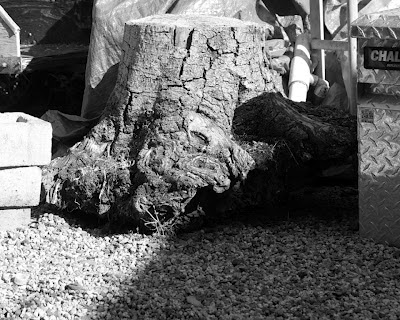 We were taking a look at the recently weeded and reorganized back 40 the other day when Mr. Cardui remarked on the swarm of small black somethings circling around an old alder stump which appeared to be infested with some sort of wood destroying insects.  I took a look and made a mental note to take time to observe the following morning.  Meanwhile I did some checking . . . are there wasps that parasitize termites?  What kinds of flies, bees or wasps nest in wood? 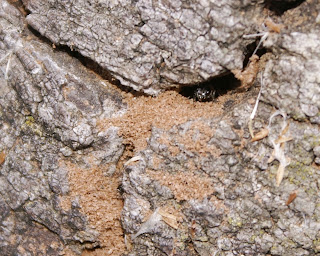 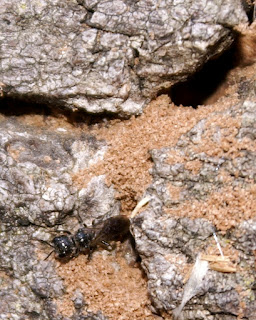 Next day on closer inspection I found many little piles of sawdust being pushed out of smallish holes riddling the bark of the stump.  Occasionally a small black head or tip of an abdomen belonging to the same type of critters that were flying around the stumped would pop out of a hole.  So the black swarmers were tunneling in the stump.  Finally one of them fully emerged, paused for a moment, then flew off.  It looked like a small (1/4 inch or so) black bee.  This was about 9 am and the stump was still in the shade. 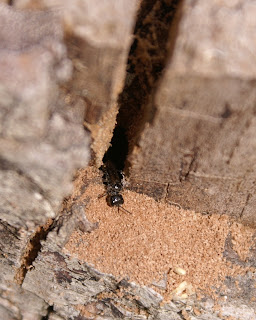 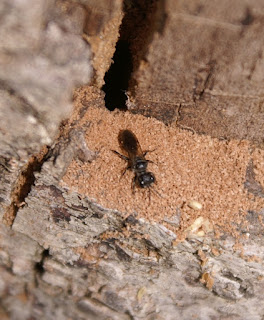 As the sun hit the stump activity in and out of the holes sped up with many take offs and landings as well as the continued excavation and expulsion of sawdust from holes here and there.  Now that the sun was high, I took a look in the nearby garden to see if any of them were there nectaring or gathering pollen.  Couldn't find any.

Wood nesting small bees would include leaf cutter and mason bees, and small carpenter bees (genus Ceratina).  I'm guessing my little bees are the Ceratina, based on general appearance and the fact they seem to be tunnelling into the wood instead of using pre-made holes. 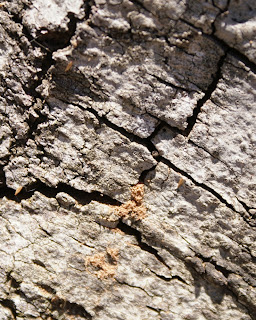 This stump is Alnus rhombifolia, a tree that had been standing dead for perhaps a year in the Irvine area.  Possible these bees were overwintering inside when the stump with them in it was transported to my place; spring arrived and they reactivated in a new locale.  The move does not seem to have slowed them down. 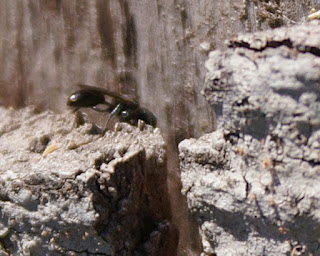 Hello! I just found your post online. We have the same bees in our tree stump! We first thought they were carpenter ants. I heard these bees are good pollinators. I guess my question is, could they be a threat to the house? Or should I leave them alone?

By the way, your pictures are great, and you provided more info on Ceratina bees than most other sites I found. Thank you!

You're welcome.
Our bees have gone, last seen spring 2014. Never saw them investigating the house