More Bug Fun among the Stumps 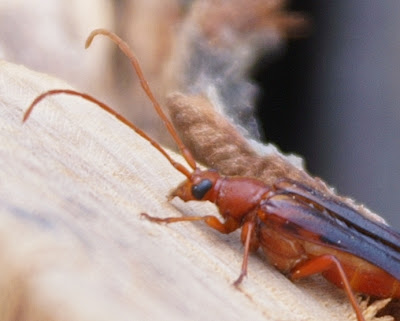 While watching the stump-dwelling bee colony in the back 40 the other day, a bright red beetle presence caught my eye crawling over another nearby stump. 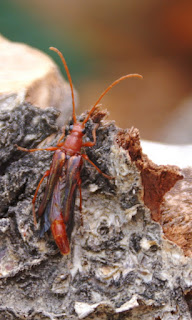 I was stumped so to speak (ba dum tsh) having never seen a beetle like this before.  It was 3/4 to one inch long not including the long antennae, and the unusually shaped wing covers (elytra) seemed distinctive so I gave it a shot at finding a visual match online.  I knew there are more beetle species than any other form of life (about 20% are beetles, about 1% are vertibrates) but this becomes really apparent while clicking through photographs on the internet.  Even once I had the family narrowed down to the longhorned beetles, that still left 10,300 species in the western hemisphere.

Anyway, thanks to the tireless at bugguide for the quick ID: I'm pleased to introduce Neobellamira delicata australis, a pretty name for one of the 200 or so species of Longhorned flower beetles in North America. 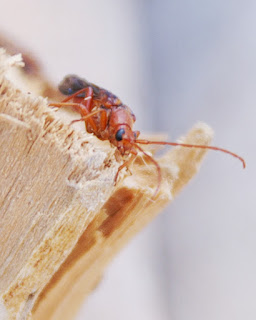 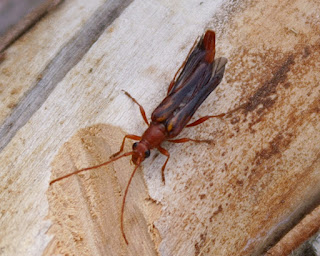 This is a female, probably seeking an egg-laying sight in this magnolia grandiflora stump, or some of the more aged wood of various species in the woodpile nearby.  She would stop at a spot and then waggle the tip of her abdomen side to side, maybe testing the feng shui or something. 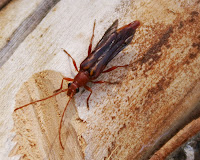 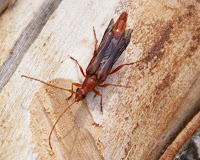 The larvae are one of the many wood-boring beetles; the adults feed on flowers.
I'll be on the lookout for these beetles on my flowers while I'm looking for small carpenter beetles. 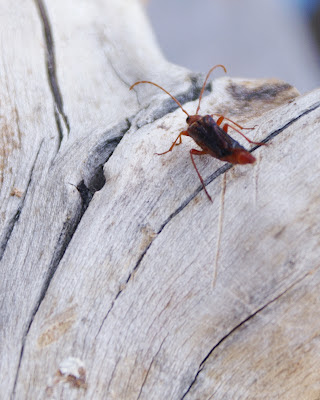