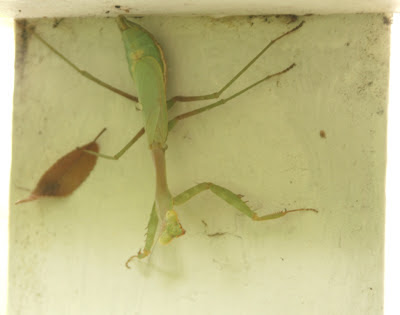 So the heat returned to So Cal after our little storm blew through, dropping maybe 1/8" of moisture, and I was hose watering the drought-stricken rain-denied California Friendlies in the parkway and sidewalk strips when I noticed a couple of tarsi poking through the fence slats just as the stream of water hit the fence.

Crouching under the myrtus communis on the other side of the fence I was able to get a picture of this mantis, Stagmomantis californica, that had taken shelter from the hose under the fence rail.  I think you can barely see a drop of hose water on her wing. 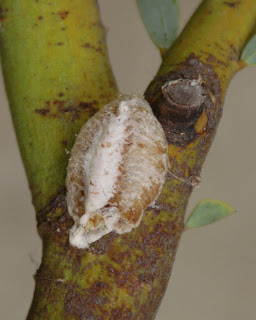 Earlier before watering I had done a bit of tree trimming and found a nice oothecum in a fork of this acacia cultriformis branch.  I always save these incredibly dense-wooded branches, let them cure, and use them the following year for plant stakes and such.  And in this case, hatching mantises.

Thanks Katie. They are so cute at that age!