RU Ready for the Spiderz? 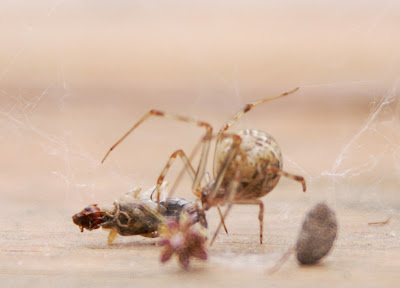 Yeah it's spider season.  We modern 21st century humans associate spiders with spooks, which come out of hiding in the closet (or in tupperwear containers in the attic) as the season slips around the corner toward winter, also known as the Dark Side.  It's all tied together somehow in our primordial hunter-gatherer psyche which spent its formative years hiding from man-eating predators abundantly hungry in the dark of winter, longing for the warmth of spring through the long dark spooky wolf-howl infested shadow of winter, spending long hungry dark hours in a cave or other drafty shelter, and bumping into spider webs in the darkest corners of that shelter while investigating the dim possibility of forgotten mislaid morsels of food.  We made up stories to explain how scary the dark of winter really was, I suppose.

Back to the spiders. 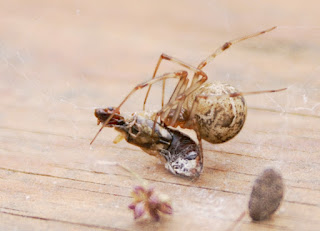 This is a brown widow, Latrodectus geometricus, beginning the task of wrapping her earwig prey in silk.  Later I found the completely wrapped earwig . . . at this point it was either a carcass waiting to be sucked dry by the spider or the already dry husk of an earwig.  I didn't really check. 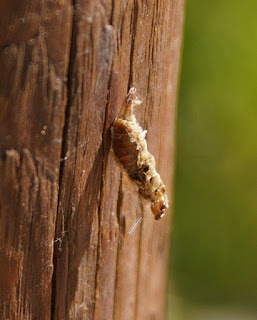 This particular brown widow was making home out of the underside of a wooden picnic bench.  We were rude enough to upend that bench while cleaning the patio, revealing her hiding place to the sun.
Here is her exuvia, molted and cast aside awhile ago as she grew under her bench. These spiders, introduced to California sometime around 2003 have become common in my neck of the woods over the past several years.  In fact they seem to be crowding out the black widows.  Although they are not aggressive, brown widows like their close relative the black widow have a bite that could require medical attention.  It's best to leave them unmolested.  If you're working in old wood piles, flower pots that have been unmoved for awhile and similar likely Latrodectus habitats, be on the lookout for spiders and wearing gloves might be a good idea. 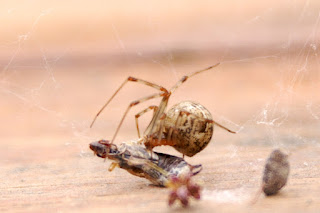 We just cleaned out our deep pantry corners looking for forgotten morsels of food, but many spiders and critters who infest the grains had gotten there before us. We had to whisk them all away (with gloves on) and put in a new supply for the long days of the Dark Side that are coming too soon. Cynthia