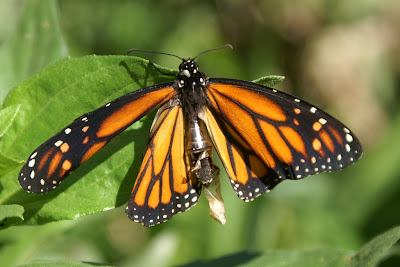 Three days ago I was observing the abundance of caterpillars, which will inevitably become pupae, then eclosing butterflies.  By the way, winter maturation of monarch caterpillars is common here; I see lots of them each winter.

I found one recently emerged adult the day I posted on the caterpillars.  The weather that day was cool, breezy and partly sunny.  By late afternoon, this butterfly was lying in the garden path.  I blew some hot air on it and it began to move in my cupped hand.  So I brought it inside for the night to see if it would take flight the next day.  It didn't.  You can see the wings have hardened in a slightly crinkled state, probably not likely to sustain flight.  I had offered the butterfly sliced orange as a food source but couldn't confirm if it had taken any. 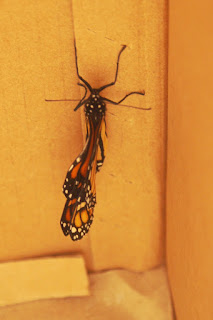 The next day turned out to be rainy; while the rumpled butterfly hung on a twig in its wine box on the back porch, I found another monarch very recently emerged hanging from the foliage in a misty rain.  So I brought that one indoors too. 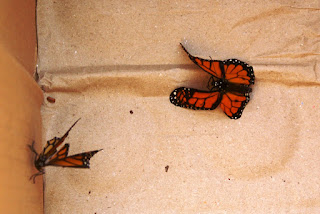 The outcome for each of these butterflies was not good.  The first one never took flight and seemed terribly weak by the morning of 12/19.  The second one's wing was malformed and parts of the chrysalis were stuck to its body.  It flapped its wings vigorously but never took flight. 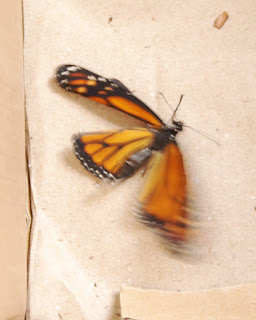 I set the two butterflies in sunny spots in the garden where maybe, if butterflies have feelings, they could feel the warmth of the sun one time before they died. 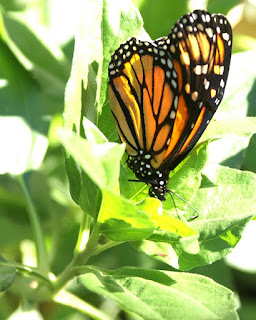 I think these two were unlucky as to the timing of their eclosure: we do see successful monarch emergences during the winter months.  After all, southern CA winters are mild, and we have warm dry stretches good for butterfly-ing.

However I'm sure conditions in winter-- Rain, cold, cold wind, lack of abundant flowers to feed on, short day length--take a toll on the adult monarch population that manages to successfully eclose.  On the other hand, many more caterpillars thrive during the winter because the population of wasps that prey on them is so much lower in the cold, and weather conditions don't seem to harm the larvae as they can the adults.  Perhaps a higher number of less fit (genetically) caterpillars live longer in winter because they aren't eaten by wasps but then get weeded out by the perilous process of pupation, made even more risky by unfavorable weather.  Or, because there are so many more pupations this time of year (because so many more caterpillars are maturing) does it just seem like there are an awful lot of failures, but percentage-wise is it the same as during spring/summer/fall? 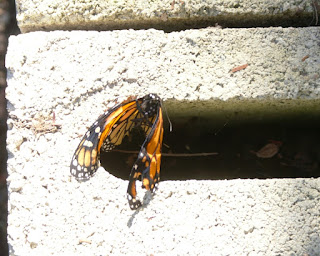 Hmm, do you think it's possible either of these butterflies had the OE spore?

Thanks for the interesting report! I start to try to save some of those wonderful Monarchs in my back yard, Southern California. I got three births. One is handicapped, exactly as yours. So I loved your pictures , hypotheses and the interest for those fantastic tinuy creatures of Nature I shqre with you.. Thank you.