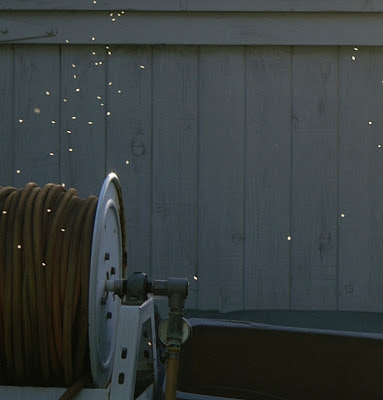 There's a spot in our driveway-- just east of the fence, under the overhanging melaleuca branches, north of the neighbor's camellia trees and above the disused spray rig, trashcans and miscellaneous detritus --where small flies gather at sunset and swarm. 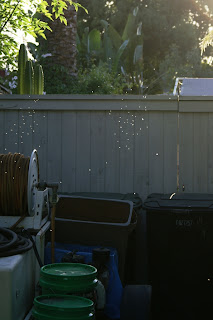 I think they look really cool glowing in the angled sunlight.  Is it the sunlight bouncing off the tree branches or the fence top that is their swarm marker? 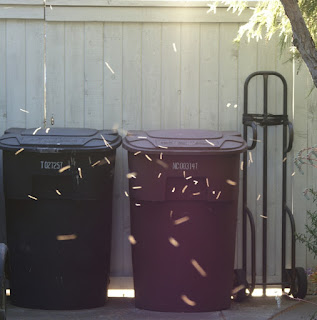 Their behavior resembles the description on of Dance Flies on bugguide see excerpt below.  Yeah, I should net one or two of them and attempt to identify.


In mating swarms, males fly up and down in a sort of dance. They have captured an insect, wrapped it in silk, and hold as an offering for females. Females seem to choose the male with the most enticing offering. Sometimes a male may offer just an empty ball of silk.

Males with "nuptial balloons"
Paul Beuk on swarming:
You may have male swarms, female swarms and mixed swarms. In the case of the first two it may be that the other sex does not form swarms but joins the existing swarm for mate selection, or there are nearby separate swarms and specimens from one of those leave for the other to select a mate.
Different species swarm at different times of day. Some may swarm during the whole day, others maybe only for an hour at dusk, etc.
The location of the swarm is determined by markers. These may be very specific (under an overhanging branch in the sun, so the swarms may move with the sun) or rather 'generally defined' (along a slope, creating a very 'long' swarm, or over the water surface in a brook).
Nuptial gifts are not known for all mating dance flies. They are mostly found in the Empididae Empidinae (in genera like Empis, Rhamphomyia, Hilara) (the latter including the balloon flies).
Posted by vanessa cardui at Saturday, May 04, 2013

I had no idea that there are Dance Flies' or that the males have offerings for the females. That is just like flowers and a box of candy for us girls.
Thanks, Cynthia