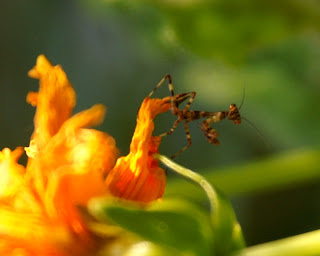 In an informal survey, I have determined more people use the spelling/terminology "Praying Mantis" which refers to the position the forelegs are held in but is otherwise a ridiculously anthropomorphic moniker, than "Preying Mantis" which is probably somewhat redundant since I think most or all mantids are predacious.

I noticed this wee one's quick movements on a withered coreopsis flower, and was pleasantly surprised to see it was a mantis. This looks not much like the Chinese mantids that hatched all over my kitchen last June: those were a drab olive green with little or no markings. This is, as you can see, quite decorative. When I went back to look a short while later, I saw an assassin bug nymph (also with striped legs) in nearly the same spot and no mantis; and so I thought maybe I was losing it: but no, the creature in this photo definitely is no agnostic assassin!
Posted by vanessa cardui at Thursday, May 31, 2007